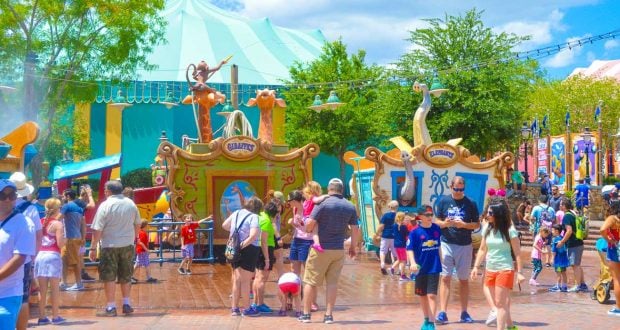 When visiting Walt Disney World, guests can enjoy four different theme parks which each transport them to another world entirely. The Magic Kingdom allows guests to experience the thrills of outer space, the chills of the Haunted Mansion, and a world of fantasy. Epcot offers guests the opportunity to explore the future of technology and nature and explore the world. Disney’s Hollywood Studios invites guests to adventure into different dimensions such as becoming a toy or accepting “the force”, and Disney’s Animal Kingdom celebrates the beauty and importance of nature. What makes each park so amazing is the incredible attention to detail and seamlessly operating attractions and experiences. Many of these details and facts are so subtle that lots of guests don’t realize them, but they are truly amazing! Here are nine totally true facts about Walt Disney World parks.

One of the most iconic attraction in Disney’s Animal Kingdom is Kilimanjaro Safaris which invites guests into the Harambe Reserve for a two week African safari. Along the way guests can have up close and personal experiences with animals including giraffes, elephants, hippos, lions, and cheetahs for a wild time. While the size of the reserve might seem impressive, many guests don’t realize that it is large enough to fit the entire Magic Kingdom into!

One of the most beloved attractions in the Magic Kingdom is Pirates of the Caribbean which allows guests to set sail with swashbuckling pirates. Despite the attraction being so popular today, it was not originally going to be built in Walt Disney World since Disney thought that guests would not be interested in the experience since they were already so close to the Caribbean. After tons of guests asked for the attraction, it was decided to add it to the park, but many of the other attractions were already complete and operating making space tight. In order to fit the massive show building for the attraction near Adventureland, Imagineers needed to place it outside of the loop already formed by the Walt Disney World Railroad tracks. In order to be able to have guests in their boats move past the railroad tracks and into the show building, a drop was added to the attraction to bring guests far enough underneath to make the clearance. So while the drop on Pirates of the Caribbean might seem like a thrilling part of the ride, it is also absolutely functional!

An underrated attraction in the Magic Kingdom which rarely ever has a wait time is the Tomorrowland Transit Authority PeopleMover which takes guests on a scenic tour of Tomorrowland via the highway in the sky. The attraction offers guests a bird’s eye view of the land as well as glimpses into nearby attractions like Space Mountain and Buzz Lightyear’s Space Ranger Spin. While the attraction seems powered like every other one in the park, many guests are surprised to learn that it is entirely operated by magnets! The TTA uses a linear induction system to push and pull the attraction vehicles making for a smooth and clean way to enjoy Tomorrowland.

An amazing fact about the Magic Kingdom that some guests don’t realize is that it actually exists on the second floor! When construction began on the park, Imagineers built a series of tunnels which could be used for Cast Members and services to both move around and work in. These Utilidors (combining utility and corridor) can be found running underneath the majority of the Magic Kingdom making the attractions and experiences that guests enjoy every day are on the second floor.

While walking around World Showcase in Epcot, guests can enjoy traditional architecture from eleven different countries from around the world. From one particular vantage point near the Odyssey guests can look across World Showcase Lagoon and enjoy the skyline of Morocco. While there are several low buildings in the pavilion, guests might not think twice about a tall one far in the distance. This tall building is actually The Twilight Zone Tower of Terror in nearby Disney’s Hollywood Studios. When the Tower of Terror was being built, Imagineers realized that it could be seen from World Showcase, so they added architectural elements to the building and chose a paint color that would complement the architecture of Morocco thus ensuring that it would blend in!

If you’ve had a chance to visit Animal Kingdom’s newest land, Pandora – The World of Avatar, chances are you were impressed with its sheer beauty! You were likely rushing to one of the two attractions held in this land known as Avatar Flight of Passage and Na’vi River Journey. If you have a moment to stop and explore Pandora’s setting (the Valley of Mo’ara), you might want to look up at the unbelievable floating mountains. Get this – there are 22 floating mountains in total! Plus, look around at the lush landscape and be in awe of the 250 varieties of living plants that are integrated with Pandoran plants. Just amazing.

In the new Storybook Circus area of the Magic Kingdom, guests of all ages can splash with Casey Junior and many circus animals in an interactive water play area. While the cars in the play area might look like regular circus carts, they also feature numbers which pay homage to the opening year of each of the four Walt Disney World theme parks. Guests should look for the numbers 71, 82, 89, and 98 respectively coinciding with the opening years of the Magic Kingdom, Epcot, Disney’s Hollywood Studios, and Disney’s Animal Kingdom.

One of the most recognizable structures in all of Walt Disney World is Cinderella Castle in the Magic Kingdom which beckons guests further into the park to enjoy the many attractions and experiences. While the castle might look as though it is made of real stone, not one brick was used in its construction! Instead Cinderella Castle is comprised of concrete, steel, and fiberglass allowing it to stand up to the high winds of hurricanes which are prone to impact the Central Florida region.

A thrilling attraction that is a favorite of many guests in the Magic Kingdom is Space Mountain in Tomorrowland. Guests who are brave enough to ride enter into Starport 75 where they are soon blasted off into space on a galactic adventure. The attraction occurs mostly in the dark, making guests feel as though they are rocketing through the stars at high speeds. While it may feel fast, many guests might be surprised to learn that Space Mountain only tops out at twenty eight miles per hour making it slower than several other attractions in the Magic Kingdom!