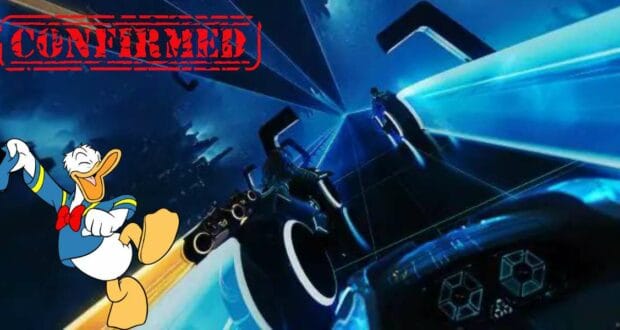 Amidst Confusion, Clues, and Codes, Disney Has Confirmed an Official Opening Date for TRON Lightcycle Run

Last evening, the official Disney Parks accounts across all social media sent out a rather mysterious message full of clues and codes in the form of a video game leaderboard.

Immediately, Disney fans began working with one another in an attempt to piece together these clues into answers. The general consensus was that at the center of these riddles was the opening date for the upcoming TRON Lightcycle Run attraction in Magic Kingdom.

When it comes to decoding this leaderboard of riddles, some rows are more straightforward than others.

However, as fans scrambled to piece everything together, the Disney Parks social media accounts sent out another message in just a short amount of time.

Fans quickly assumed that this message meant that TRON Lightcycle Run would be opening on 4/4 (April 4) of this year. Although, some fans were skeptical of what this meant, considering there was no confirmation.

However, less than an hour after this enigmatic message was sent out across Disney Parks social media accounts, Disney confirmed that April 4 is indeed the attraction’s yesterday’s official opening date!

So… where was that 4/4 TRON opening date in yesterday's clue? We should have paid attention to the text in the tweet: >◎//: Need a Clu?

RELATED: Will TRON Lightcycle / Run Open With a Standby Line or Virtual Queue Only?

In case you needed any more convincing, Scott Gustin breaks down the “clu” that was hidden in plain sight. While Disney fans tried to wonder what rows two, eight, and nine meant, the answer was right there in front of us the whole time!

Disney’s marketing has done it again by creating something interactive, fun, and mind-bending to promote its latest Magic Kingdom attraction.