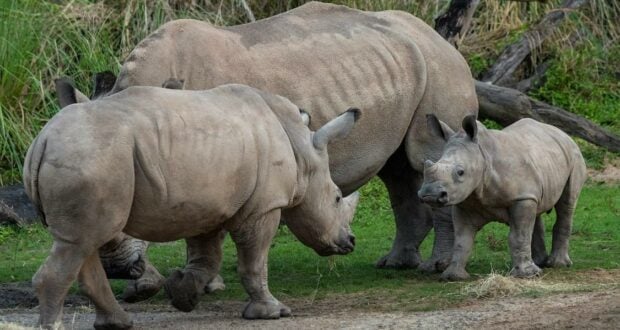 Baby Rhino Introduced to His Brother on Kilimanjaro Safari

If you love baby animals, here’s an article for you. Walt Disney World has kept you updated on many of the baby animals born at Disney’s Animal Kingdom. Rhinos have been one of the main ones we’ve been sharing stories of.

Three baby rhinos were born at Disney’s Animal Kingdom, which is a huge accomplishment. Walt Disney World has a Disney Conservation fund that helps animals not only at Disney but worldwide.

You can find out more about this program here.

Now we know why you came here because you want to see photos of this family meeting for the first time. Scott Terrell shared more information with pictures with Disney Parks Blog.

A new year brings new milestones and more conservation efforts for our white rhinos! Today Mylo, our 4-month-old rhino, joined his 1-year-old half-brother Ranger and the rest of the “crash” (a rhino herd) on the savanna at Kilimanjaro Safaris at Disney’s Animal Kingdom Theme Park. Mylo and Ranger are two of three white rhino calves born at the theme park since October 2020. Each birth was part of the Species Survival Plan, which is overseen by the Association of Zoos and Aquariums to ensure the responsible breeding of endangered species in managed care.

The adorable, brotherly encounter marks the first time playful Mylo and Ranger interacted with each other on the Harambe Wildlife Reserve and we are excited to share images with you! Park guests aboard Kilimanjaro Safaris now have a chance to see little Mylo wallowing in the mud and exploring his new environment. It’s our hope seeing a rhino in person inspires our guests to connect with these magnificent creatures and sparks a lifelong respect and passion for nature that extends beyond our theme park into action and conservation for the species.

And that is not the only rhino news I have to share today. I am also thrilled to announce the name of the third and newest member of the white rhino herd is Logan! The spunky female calf was born in November to first-time mom Lola and Dugan, the bull of the crash. The name is the perfect combination of Dugan and Lola’s names and our animal care team’s homage to mom and dad. Logan will continue bonding with mom backstage before joining the herd on the savanna at Kilimanjaro Safaris in the coming months.

The three successful rhino births are an important milestone for our team of animal care experts and the culmination of a journey that began nearly two years ago with our scientists, veterinarians and keepers whose expertise made this possible. All three rhinos allow us to learn more about this near-threatened species and share our learnings with other institutions to aid in the expansion of the population in managed care.

For a behind-the-scenes look at how our team of experts care for all of these animals, check out “The Magic of Disney’s Animal Kingdom” on Disney+. And be sure to check the Disney Parks Blog, Disney’s Animals, Science and Environment Facebook page and @drmarkatdisney on Instagram, as we will continue to share updates on our animals and more conservation news!