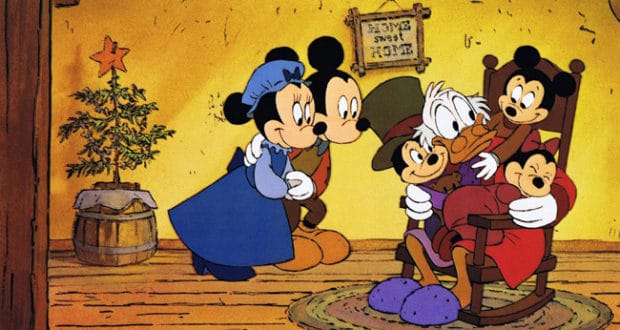 Ho, Ho, Ho! Whether you’re getting ready for a trip to Walt Disney World during the holiday season, making plans for a Disney trip as a holiday gift, or just want to get into the Christmas spirit, there are heartwarming Disney movies ready to give you all of the holiday feels. So, grab that mug of hot cocoa and the cozy blankets and get ready to enjoy these must-watch movies that always capture the magic of Disney and Christmas!

1. Lady and the Tramp

Making its debut in 1955, the animated classic “Lady and the Tramp” begins its tale with Jim Dear giving Darling a Christmas gift of the cocker spaniel, Lady. After a heartwarming story full of humor, adventure, and love, the film ends with another sweet Christmas scene guaranteed to tug on your heartstrings.

While this retelling of the Charles Dicken’s classic tale is a short 26 minutes, it’s big on Christmas cheer. Mickey and Minnie Mouse star as Bob Cratchit and his wife Emily. Other favorite Disney pals have roles in this cartoon, including Scrooge McDuck, Donald and Daisy Duck, Goofy, and even Jiminy Cricket.

With its beautiful scenes of a winter wonderland in Arendelle, a silly snowman and reindeer, and the themes of the importance of family and friends, both the original “Frozen” and the “Frozen” sequel will always be perfect movies to watch with loved ones around the holidays.

The main characters in the four award-winning Pixar movies are lovable toys, so watching the Toy Story movies is a sure bet for a fun family evening during the Christmas season. The toys that Andy plays and grows up with show why friendship is special, and the movies are full of love, silly scenes, and great adventures, making them perfect to enjoy around the Christmas tree.

A classic film from 1960, this movie tells the tale of a family shipwrecked on a deserted island and the ingenious ways they find to make a home and start a new life on the island. This movie has everything: pirates, exotic animals, treehouse living, and a budding romance. My favorite scene, by far, is when the family celebrates Christmas together, complete with carols played on the rescued organ.

Our favorite Muppets, including Kermit, Miss Piggy, Gonzo, Rizzo, Fozzie Bear, and Sam the Eagle, take a turn at reenacting A Christmas Carol in this 1992 film. It’s as sweet and funny as the animated version with Mickey and his pals, and this version features Michael Caine as Ebenezer Scrooge. The great holiday songs in this version make it fun to listen to and watch year after year.

Several heartwarming short tales are included in each of these animated movies, including the classic “Gift of the Magi”, starring Mickey and Minnie Mouse.  Despite being released respectively in 1999 and 2004, these stories never get old! Full of our favorite Disney pals celebrating the true meaning of Christmas, both of these movies are timeless.

True Disney fans will appreciate the whimsy of “Santa’s Workshop”, one of the Silly Symphony animated short films produced by Walt Disney Productions. Audiences first watched “Santa’s Workshop” in 1932, but it still has a nostalgic appeal for every Christmas season.

With its catchy, uplifting songs, lively dancing, and whimsical scenes, Mary Poppins is an all-around fun movie to watch. While it doesn’t take place during Christmas, it fills your heart, makes you smile, and will possibly even leave you humming “Supercalifragilisticexpialidocious” long after the movie is over! Mary Poppins is a definite must- watch movie every Christmas in my house, easily capturing the magic and wonder of the season in a practically perfect way!