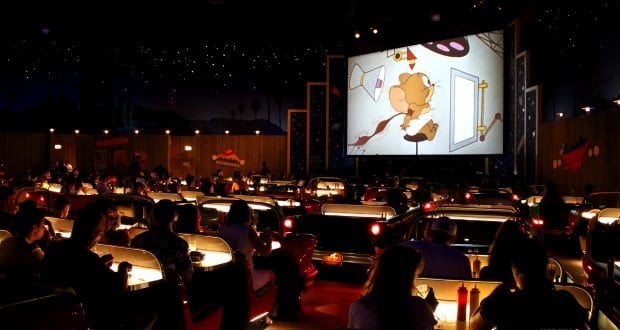 A Guest will rarely encounter a bad meal in Walt Disney World. But there’s more to a great dining experience than great food! Luckily, Disney World has no shortage of fabulously themed restaurants for every taste and interest, in Disney Springs, Disney Resorts, and of course, in the Theme Parks themselves. So if you’re looking for a restaurant in the Disney Theme Parks with an unforgettable atmosphere along with excellent food, look no further!

Be Our Guest Restaurant

This one’s a no-brainer. After all, it doesn’t get much better than dining in Beast’s Castle! Located in Disney’s Magic Kingdom, Fantasyland’s Be Our Guest Restaurant consistently enchants Guests who want to be treated like royalty as they step into the setting of the classic Disney film, Beauty and the Beast. You’ll choose from three rooms in the Castle for your dining experience: the Grand Ballroom, with its fabulously painted high ceiling and permanently snowy windows; the Castle Gallery, where you’ll watch Belle and Beast dance the night away amid Belle’s prized library collection; and the deliciously moody West Wing, complete with an enchanted rose, transforming painting and even lightening. Enjoy a French-inspired lunch or dinner in royal style at Be Our Guest Restaurant!

The World Showcase at Disney’s EPCOT Theme Park is all about transporting Guests to countries around the world. And part of learning about another culture is enjoying the food, naturally!  Nine Dragons in EPCOT’s China Pavilion does a great job of making you feel like you’ve stepped into a restaurant in China. The dark wood carvings are ornate, and traditional lanterns will light your meal. Exquisitely carved or etched dragons make repeat appearances throughout the restaurant. If you are lucky enough to snag a table by the window, you’ll gaze out at the World Showcase Lagoon. Nine Dragons’ Pan-Chinese cuisine allows Guests to sample dishes from different regions of China without leaving Orlando.

A Magic Kingdom restaurant based on the classic ride The Jungle Cruise? No wonder Jungle Navigation Co. Ltd. Skipper Canteen in Adventureland is a Guest favorite! There are three different dining rooms to explore on your Skipper Canteen adventure: the Mess Hall, featuring colonial-era décor; the S.E.A Room, a luxe (formerly) secret meeting place for the Society of Explorers and Adventurers; and the Jungle Room, which used to be the parlor for the Falls family. Spend some time during your dining expedition admiring all the treasured artifacts, the traditional warmth of the décor, and the Disney Easter eggs throughout the vast restaurant. And get ready for a helping of puns from your skipper (did we mention The Jungle Cruise inspires the restaurant?). The food here is appropriately exotic and rewards Guests with a sense of adventure!

Theming in Disney’s Animal Kingdom is impeccable, so a Guest should expect nothing less in the Park’s table service restaurants. One of the best-themed restaurants in Animal Kingdom is Yak & Yeti Restaurant, in the Asia area of the Park, near Expedition Everest. Filled with artifacts from Southeast Asia, the restaurant is a stunner, inside and out. The back story is that an Anandapur merchant has opened his home as a restaurant and hotel, and lucky Guests can enjoy his collection of treasures as they dine. You’ll eat among rich colors, and elaborately carved woods, and gold-and-jewel encrusted Asian statues. The restaurant has two stories, so make sure you take some time to explore! The Pan-Asian cuisine at Yak & Yeti has something to offer for every taste. The Fried Wontons (filled with scrumptious cream cheese and pineapple) and the Pork Pot Stickers are always hits!

The Sci-Fi Dine-In Theater in Disney’s Hollywood Studios transports Guests back in time to a drive-in movie in the 1950s. The starry sky opens up above you as you dine in a booth shaped like a retro car, watching classic 1950s sci-fi clips on the screen. This unique restaurant packs a ton of fun into any lunch or dinner! The menu is filled with familiar American comfort food, from onion rings to turkey sandwiches to mac and cheese. And for dessert, there are plenty of tasty offerings like the House-Made Sci-Fi Candy Bar to satisfy every sweet tooth. One thing’s for certain – you’ve never been to a drive-in like this before!

Right in the center of Disney’s Animal Kingdom, on Discovery Island, is one of the best restaurants in the Park – Tiffins. Equal measure gourmet restaurant and art gallery, Tiffins celebrate all things travel through art. Guests are encouraged to wander the three rooms that comprise the restaurant, admiring the extensive artwork collection, including paintings, sculptures, and photographs inspired by the Imagineers responsible for Disney’s Animal Kingdom Park. The delicious food here is likewise artistic and hails from various corners of the globe: African, Latin, and Asian delicacies are all represented on the menu. Gorgeous Nomad Lounge, adjoining Tiffins, is perfect for enjoying a pre-or post-meal drink or snack.

The world-class food a Guest can enjoy at the best table service restaurants in Walt Disney World Theme Parks is matched only by the quality of the theming and décor surrounding diners. For a truly magnificent dining experience that you won’t soon forget, think about visiting one of the above restaurants the next time you’re in a Disney World theme Park!