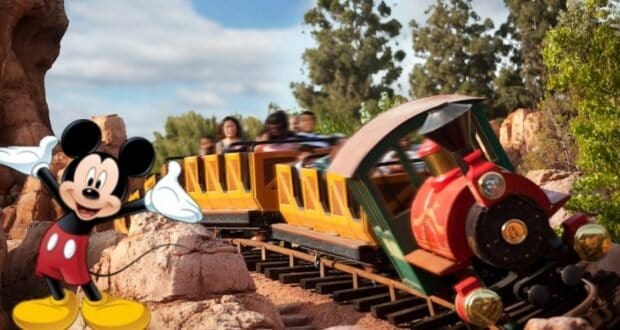 “Hang onto your hats and glasses, folks, cause this here’s the wildest ride in the wilderness!”

Just hearing that iconic phrase pumps the adrenaline around our body! These famous words, of course, can be heard on Disney’s Big Thunder Mountain Railroad.

Every Disney fan has heard the kidney stone story (in which patients in a medical study passed kidney stones after riding Big Thunder Mountain Railroad at Walt Disney World  The study also found that the Space Mountain and Rock ‘n’ Roller Coaster Starring Aerosmith failed to cause this result), but there is another fun trick up this roller-coaster’s sleeve.

This fan-favorite attraction first opened at Disneyland in Anaheim in 1979, followed by Magic Kingdom in 1980, Tokyo Disneyland in 1987, and finally Disneyland Paris in 1992.

All variations of the ride follow a similar story designed by Disney Imagineers – sometime in the late 1800s, gold was discovered on Big Thunder Mountain in the American Southwest. Overnight, a small mining town became a thriving one (Rainbow Ridge in Disneyland; Tumbleweed in Magic Kingdom; Thunder Mesa in Disneyland Paris).

Mining was prosperous, and an extensive line of mine trains was set up to transport the ore. Unknown to the settlers, the mountain was a sacred bur cursed spot to local Native Americans, leading to the trains becoming possessed and riding the tracks by themselves. 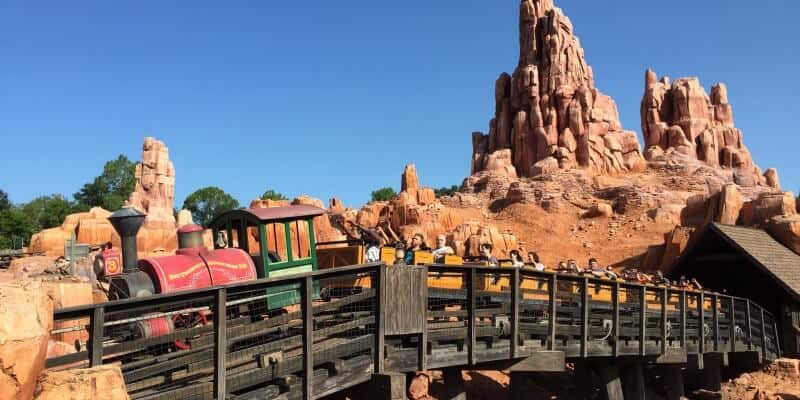 Now, Disney Guests can race through the haunted gold mine aboard a speeding train with thrills, caves, and, goats – which are the basis of a fun trick aboard the ride.

At Walt Disney World’s Magic Kingdom, Billy is located on one of the rooftops of Tumbleweed, while in Disneyland Paris, he is joined by another goat chewing on a clothesline. In Disneyland Park in Anaheim, California, he can be found perched on one of the hoodoos chewing a stick of dynamite, bleating at passing trains near the top of the second lift hill.

Billy is central to the Disneyland “Goat Trick”, an infamous trick known to Guests and Cast Members that provides riders with an extra boost of G-Force.

Ask any Cast Member working the attraction, and they will tell you that staring at the goat results in feeling a greater sense of disorientation on the ride! 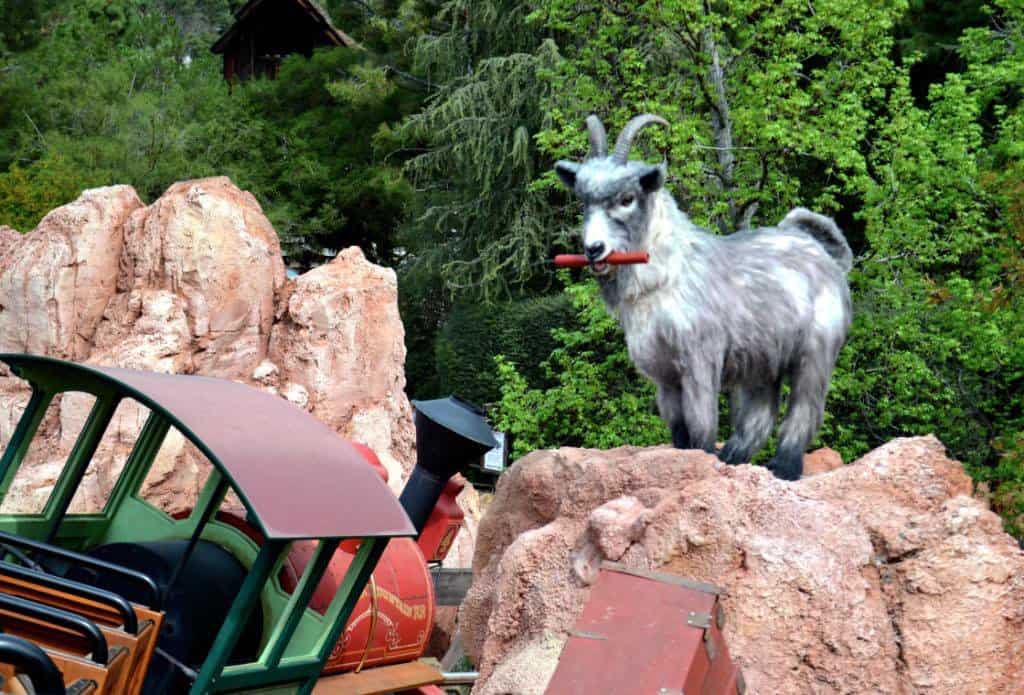 For those wanting more detail on this sensory trick, we’ve got the lowdown.

When you go up Disneyland’s Big Thunder Mountain second chain lift, you will notice a goat with dynamite in its mouth.  As the ride descends, follow this goat with your head and never take your eyes off of him. Staring at the goat in this way will lead you to feel pressure “pulling” you, which will make it seem like you’re going much faster than you really are.

Cast Members told us that the goat-staring motion tricks your inner ear into interpreting the G-Forces in a different kind of way. For those who want the science, staring down the goat provides vestibular input that is at odds with what your visual input is telling your brain, all centered on centripetal force.

Your inner ear will make your body feel as if it is being pushed backward rather than sideways, providing an extra feeling of G-Force.

Many Disney Guests note that to really feel this sensation, you need to be in the back three rows of the train, leaning sideways so that your back is almost entirely against the left side of the train.

This isn’t the first time this “Mountain” goat has had his time to shine.

In a “wild” marketing spot back in 2013, Disney launched the “Free the Disney Goat” campaign for Walt Disney World in Orlando, Florida.

In a fun video, a puppet version of the Goat implored viewers to request that Disney allow him some time off from Big Thunder Mountain to explore the WDW Resort. Disney promoted the hashtag #FreeTheDisneyGoat and created a website featuring the Goat’s drawings imagining himself riding other attractions at EPCOT, Disney’s Hollywood Studios, and Disney’s Animal Kingdom theme parks.

Remember, from February 14 to February 18, 2022, Big Thunder Mountain Railroad will be closed for routine maintenance at Walt Disney World.

So, next time you’re riding Big Thunder Mountain, remember to sit near the back of the train and stare down Billy the Goat!