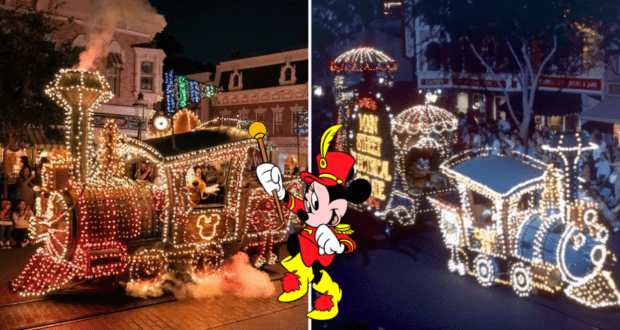 Today is the 50th anniversary of the Main Street Electrical Parade! This classic nighttime parade has been performing since June 17, 1972, and over the years it has become one of the most memorable experiences for Guests visiting both Disneyland and Walt Disney World.

To celebrate, the Disney Parks Blog shared some photos taking a look back at the parade’s 50-year history, and we’ve got some tips for how you can still catch this special Disney parade for a very limited time. The original run of the Main Street Electrical Parade ran in Disneyland Park from 1972 to 1996, and over the years forms of the parade have opened for a number of limited time engagements at the Magic Kingdom in Walt Disney World, Tokyo Disneyland, and Disneyland Paris.

During the parade, the rest of the lights would be dimmed along the parade route so that the thousands of lights on the floats would light up the park. Aside from the lights and iconic Disney characters, one of the most beloved parts of the parade is the synthesizer music inspired by a piece called “Baroque Hoedown” with pieces of Disney movie music blended in. The original finale unit for the Main Street Electrical Parade, “Honor America,” made its debut in 1979. Affectionately referred to by fans as “the bacon float” because the rolled out American flag unit sort of resembled a crispy piece of bacon, the float was a mainstay of Disneyland and the Magic Kingdom for a number of years.

Speaking of the Magic Kingdom, the Main Street Electrical Parade ran in Walt Disney World’s flagship park from 1977-1991, before it was replaced by Spectromagic. The parade continued into the late 90s and 2000s with limited runs at many of Disney’s Castle Parks, before returning this year for another “limited engagement” in Disneyland. The current version of the parade features a brand new finale unit that celebrates the theme of “togetherness” in honor of its 50th anniversary this year. Guests seeing the parade today will be able to take in all of the classic elements of the original, plus a special finale featuring over a dozen characters from Walt Disney Animation Studios and Pixar Animation Studios. The parade runs nightly at 8:45 p.m. and 10:45 p.m. (depending on park closing). You can see the parade on Main Street, U.S.A. of course, but you may also have luck finding a spot to watch the parade near “it’s a small world,” and just past Sleeping Beauty Castle or around Town Square.

Note: The route for the second show of the night is reversed, and the parade is about 20 minutes long, so depending on where you stand it may take some extra time to get to you.

Don’t miss the Main Street Electrical Parade during your next trip to the Disneyland Resort, and have a magical time!