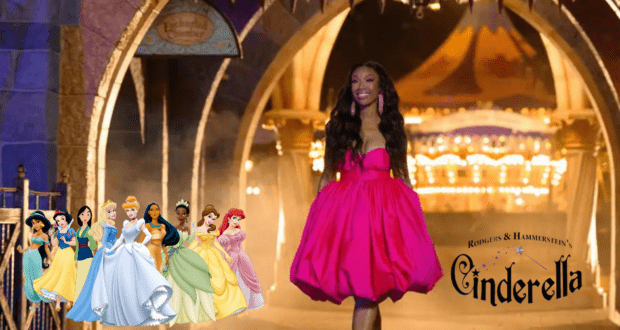 This week marks a special event for the Disney community. Last year, The Walt Disney Company debuted the Ultimate Princess Celebration, a “global extravaganza that highlights the impact of Disney Princesses and the courage and kindness they inspire in fans all around the world.”

This year, Raya from Raya and the Last Dragon (2021) will be making her debut as an official Disney Princess. World Princess Week returns from August 21-27, and Disney’s Parks will celebrate in special ways. Disneyland Park kicked off the affair with a performance by Grammy Award-winning recording artist Brandy. Singing the event’s theme song, “Starting Now,” she performed in front of Sleeping Beauty Castle with magical projections lighting up the backdrop.

The singer/actress was a perfect choice, as she is a Disney princess herself! Brandy starred in The Wonderful World of Disney, Rodgers & Hammerstein’s Cinderella (1997) alongside Whitney Houston in the memorable musical production. ABC will be airing a cast reunion as well as a presentation of the beloved film for its 25th anniversary this year. Entitled, “Cinderella: The Reunion, A Special Edition of 20/20” the program airs tomorrow from 8:00-9:00 p.m. ET.

Fans can also stream the special on Hulu the following day. The film will air after the reunion from 9:00-10:00 p.m. ET, and is also available to stream on Disney+.

Along with Brandy’s iconic performance at Disneyland, the Resort will be hosting a variety of “magical extras” for Guests to celebrate. Magic Key Holders can visit Stage 17 at Disney California Adventure Park for photo opportunities and other limited-time membership benefits.

Walt Disney World Resort and Disneyland Paris will follow suit with their own unique offerings to celebrate the event. Guests staying at one of Walt Disney World’s resorts this week will be treated to princess-themed Movies Under the Stars. Disney Springs will also host an event in the form of a dance party complete with a princess theme.

Check out Disney Parks Blog for more details on all the available Disney Princess festivities! If you’re a Brandy fan, check out the video of her beautiful Disneyland performance, which debuted today!