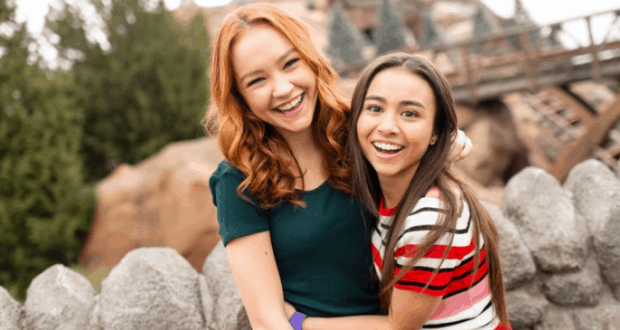 Disney Channel released a new live action Disney Channel Original Movie based on Kim Possible.  Recently two of the stars from the film, Sadie Stanley and Ciara Riley Wilson, visited Walt Disney World to celebrate the new movie.  They were seen enjoying a fun time at Magic Kingdom Park, where they got to check out Fantasyland and take a ride on Seven Dwarfs Mine Train.  The pair hosted the Kim Possible Kickoff at the Disney Soccer 3v3 Championship Weekend which took place at EPSN Wide World of Sports Complex.  There was also an exclusive sneak peek of the movie, a cheerleading routine choreographed to “Call Me, Beep Me!”, the catchy song from Kim Possible and a performance from an 80 piece marching band.  It was definitely a fun nod to the original show and the new movie.

Mickey Mouse and Minnie Mouse also joined Sadie and Ciara to acknowledge one of the teams as the Kim Possible Hero Award recipients.  The award is given to the group that represents the best qualities of a champion—teamwork, bravery, friendship and the Ron Stoppable drive to reach their goals.

See more of the Kim Possible Kickoff fun in the video below:

If you are a fan of Kim Possible, the new movie debuts on Disney Channel on February 15th, 2019 at 8 PM. Be sure to check it out!

Who else out there is a fan Kim Possible?