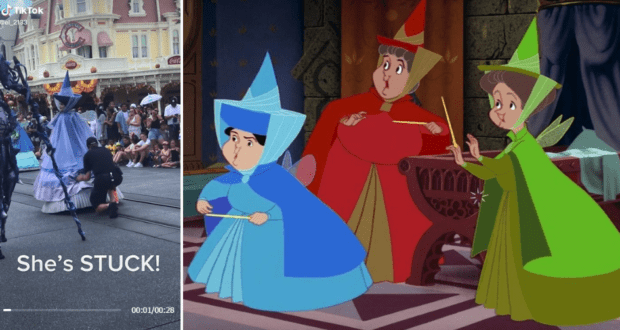 The Festival of Fantasy Parade is one of the most magical experiences at Walt Disney World, allowing Guests to see lots of beloved characters with an upbeat soundtrack and gorgeous costumes.

One of the most memorable sequences in the parade is the Sleeping Beauty (1959) unit, which features Prince Phillip, the Maleficent dragon, and the three fairies who watch over Princess Aurora in the film, Flora, Fauna, and Merryweather.

Merryweather, the fairy responsible for temporarily turning Aurora’s dress blue, had a more difficult time than usual making it down the parade route yesterday, with a short incident being caught on camera in the Magic Kingdom. 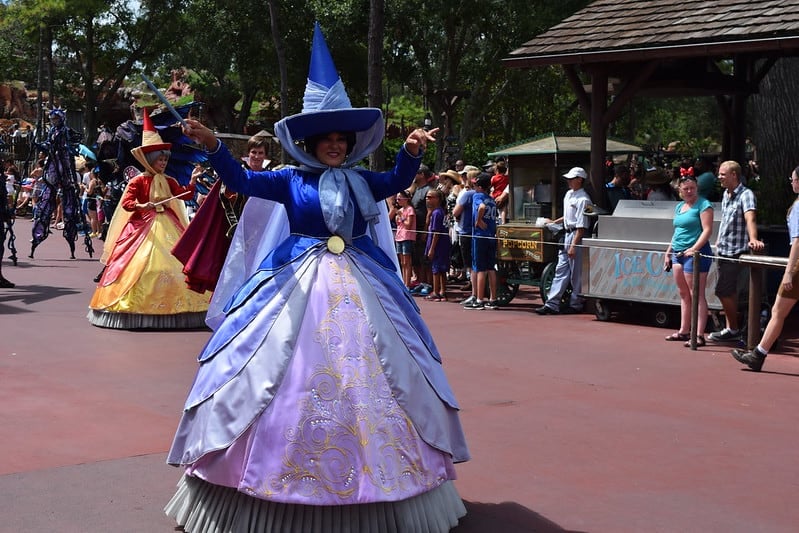 During yesterday’s run of the parade, things were a bit more challenging than usual for Merryweather when she seemed to run a little low on ‘magic’ and found herself stuck on the parade route. The incident occurred toward the end of the Festival of Fantasy Parade, as the Sleeping Beauty unit had already made it to Main Street U.S.A. (following the route from Frontierland and Liberty Square.)

TikTok user @el_2133 caught the incident on camera, noting that the iconic fairy was thankfully only stuck for about three minutes:

Merryweather, along with Flora and Fauna, all did an excellent job of keeping the magic alive by waving their wands and remaining in character while a maintenance character worked on getting some extra power to her so she could finish out the parade route by Town Square.

Disney’s Festival of Fantasy Parade is often less eventful (at least in terms of unplanned incidents like this one) but fans may remember another incident that took place in 2018 when the Maleficent dragon who typically breathes fire caught fire herself.

Despite this small number of incidents, the parade is a wonderful way to see lots of Disney characters and enjoy some incredible performances and sights in the Magic Kingdom. It typically takes place once per day around 3:00 p.m., and may run at 12:00 p.m., too, during peak seasons. Disney describes the Festival of Fantasy parade as:

Magic Marches Down the Street
The unbridled enchantment and vivid pageantry of Fantasyland—and its many inhabitants—winds its way through the park in a thrilling parade spectacular. The dazzling mix of floats, motion and original music will keep you humming along for days to come.

See Disney Characters and Much More
Be a part of this grand gala, with spectacular, state-of-the-art floats starring some of your favorite Disney Characters from Tangled, Peter Pan and The Little Mermaid. It’s a festival of fun for everyone!

We are glad that Merryweather was able to get moving quickly, and recommend that you check out the Festival of Fantasy parade during your next Disney vacation! You can find current times for the parade in the My Disney Experience app and on DisneyWorld.com.