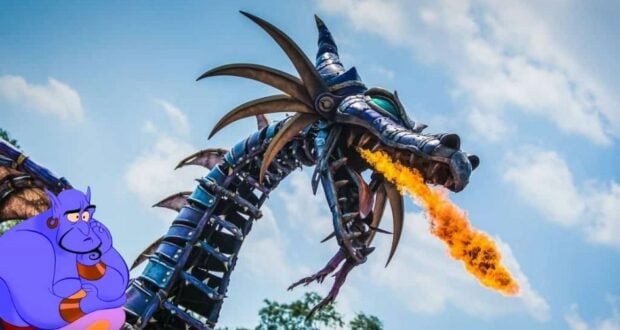 Magic Kingdom’s Festival of Fantasy Parade has returned at Walt Disney World Resort! But, are you willing to pay to skip the crowds for an ideal parade viewing spot?

With the glorious return of the Maleficent Dragon, March 9 was an exciting day at Magic Kingdom. The beloved parade rolled through the parade route, reaching Main Street, U.S.A.

Disney fans quickly noticed a few pieces were missing, such as Song of the South‘s (1946) “Zip-a-Dee-Doo-Dah” being removed from the parade soundtrack. In addition to the return of the parade, Magic Kingdom Guests were met with flash flood waters following the parade to wade through.

With Disney Park Guests once again lining the streets to catch a glimpse of the Festival of Fantasy Parade, Disney has announced they are adding the popular parade to its list of Disney Genie+ experiences.

This past fall, Disney rolled out Disney Genie, Disney Genie+, and individual Lightning Lane experiences. The Disney Genie is a complimentary service on the My Disney Experience App that helps Guests navigate around the Parks. Disney Genie+ is similar to the former complimentary FastPass system, but now costs Guests $15 per person, per day. This upcharge service allows Guests to select one attraction at a time to skip the normal standby line.

Then Disney has individual a la carte Lightning Lane attractions. These are the most popular attractions at Walt Disney World. Guests can pay one set fee (such as $13 per person) to skip the line to ride attractions like Star Wars: Rise of the Resistance.

Disney has now added the popular Festival of Fantasy Parade to its list of Disney Genie+ attractions at Magic Kingdom as of March 11, 2022.

This means, if you decide to pay $15 per person for the day at Magic Kingdom, you can try to make a Festival of Fantasy Parade Lightning Lane selection for a reserved viewing spot on the parade route.

According to reporter Scott Gustin, the Festival of Fantasy Lightning Lane special reserved viewing area will be near the Partners Statue in front of Cinderella Castle.

Currently, the list of Disney Genie+ Lightning Lane entrances at Magic Kingdom include:

While Space Mountain was a former individual Lightning Lane attraction, it has been temporarily added to the Disney Genie+ list as noted above through August 7.

Currently, the only individual Lighting Lane attraction Guests can pay a la carte to skip the wait is Seven Dwarfs Mine Train.

Will you be using Disney Genie+ in hopes of snagging a special viewing area for the Festival of Fantasy Parade?