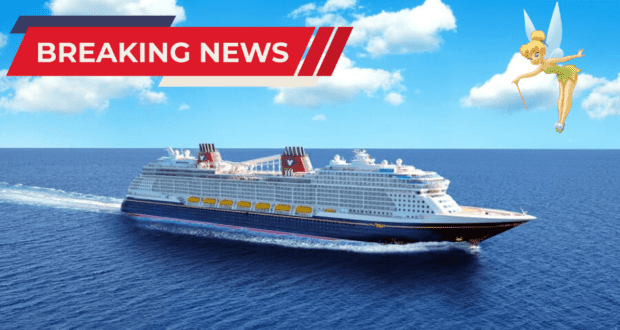 Disney Just Revealed the Name of Its Next Cruise Ship!

The  2022 D23 Expo has given us lot of exciting news out of Disney Parks, Resorts, and movies, and now it’s time to turn our attention toward Disney Cruise Line.

In 2016, Disney Cruise Line officially announced the addition of two new ships, and a third ship was announced as well in 2017 with launch dates originally set for 2021, 2022, and 2023. Of course, a global pandemic will change plans, and so the Disney Wish is so far the only one of the three new ships that has already launched. Now, Disney has finally shared the first details of the next ship to join the Disney Cruise Line fleet, including the ship’s name!

Just announced! Adventure calls as Peter Pan reveals the name of the next ship to join the Disney Cruise Line fleet 🚢✨ https://t.co/7Nl9gTaRrg pic.twitter.com/vlgFhMJOHG

Like the Disney Wish, the two upcoming ships are also expected to be built at the Meyer Werft shipyard in Germany, but Disney has not yet announced a date when construction will begin on Treasure. We do have an exciting first look at Treasure however thanks to an artist rendering from Disney Cruise Line that you can view here.

The new ship will focus on Disney heroes and characters we know and love, with new totally immersive experiences only available on the newest ship.

Sails aboard the Disney Wish are available for booking now for Bahamian cruises out of Port Canaveral with stops at Castaway Cay, with complete reservation information available on DisneyCruiseLine.com. As for the newest ships, we will continue to monitor updates from Disney Cruise Line and will report back as we know more here on DisneyTips.