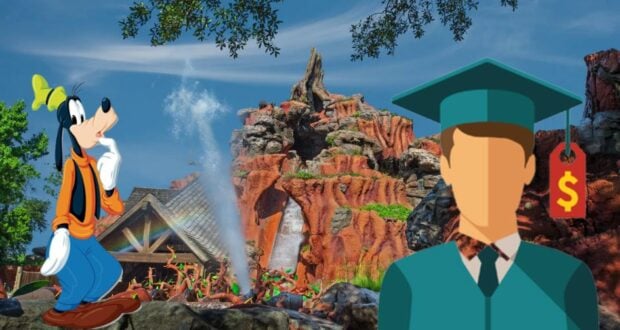 News outside of the Disney bubble has been focused on President Joe Biden’s announcement on August 24, 2022, that he will provide money for student loan debt forgiveness. But how does this compare to Disney’s Splash Mountain overhaul? One fan speaks out.

The news everywhere is breaking down the new student loan forgiveness recently announced. The controversial decision has sparked much debate… but now it’s somehow colliding with the Disney Park Splash Mountain debate.

Disney has announced its plans for the iconic water ride known as Splash Mountain at Walt Disney World Resort and Disneyland Resort to get a complete overhaul in late 2024. The attraction will be rethemed to “Tiana’s Bayou Adventure,” featuring Disney’s animated classic, The Princess and the Frog (2009).

Some Disney fans want Splash Mountain’s current theme of Disney’s Song of the South (1946) to remain, while others are eager to see Princess Tiana in her “Tiana’s Bayou Adventure.” Disney has made it clear the change is happening to provide for a more inclusive experience with efforts to remove any racist connotation Song of the South may have.

One Twitter account by the name “First They Came For Splash And I Said Nothing” (@Came4Splash) provides in its bio, “Life, Liberty, and the Pursuit of Your Laughing Place.” A recent post made by the account has Disney fans scratching their heads.

@Came4Splash posted, “OK SO WE ARE GOING TO FORGIVE STUDENT LOAN DEBT WHICH THEY AGREED TO PAYING BUT WE DONT GET TO KEEP SPLASH MOUNTAIN WHICH I DID NOT CONSENT TO BEING REMOVED!!!! #studentloanforgiveness #savesplash”

Theme park fans are trying to figure out if the post is a parody or real.

@itzybitzminnie took to social media to share the post with, “i have tears streaming down my face bc im laughing LMFAOOOOOO PLEASE.”

Comments to the post include, “Has to be satire. Right? RIGHT?????”

Another comment notes, “I have to give them credit they have the impeccable ability to make anything in the world relate back to their cause”

Can you understand the comparison between student loan debt and Splash Mountain? One person comments, “I’ve tried to figure out the comparison for like 5 minutes and my brain is fried.”

And, of course, the gifs are in full swing in the comments:

Another gif comment notes, “I hope it’s a joke.”

One person comments, “I wish I was as clever as that person cause damn.”

Just this week, Disney shared an update on its retheming progress for Splash Mountain as well as new artwork that is inspiring Walt Disney Imagineers to work on the new Tiana Bayou Adventure attraction. We’ll be sure to keep Disney Tips readers informed as Disney reveals the latest details about the 2024 overhaul.