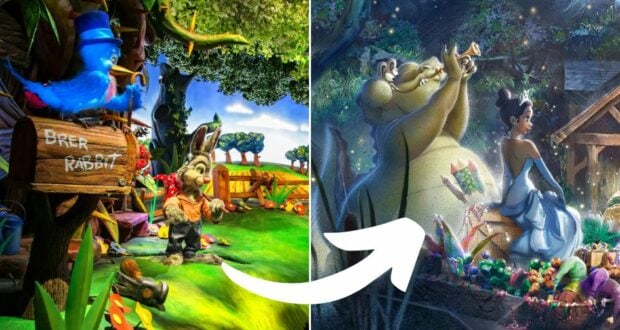 As we prepare for the iconic Splash Mountain attraction at Walt Disney World Resort and Disneyland Resort to be forever changed, Disney is revealing another update on the nostalgic attraction’s new theme.

In June 2020, The Walt Disney Company announced it will be removing Splash Mountain’s current theme featuring Disney’s Song of the South (1946) to provide a more inclusive experience with efforts to remove any racist connotation Song of the South may have.

The removal of Br’er Rabbit, Br’er Fox, and Br’er Bear recently hit the Magic Kingdom Boo-To-You Parade, with “Zip-A-Dee-Doo-Dah” music being dropped at Disney Park experiences around the globe.

And while the iconic water ride is still in operation at both Magic Kingdom Park and Disneyland Park, Disney has announced the attraction will be getting an overhaul in “late 2024” when it will be renamed “Tiana’s Bayou Adventure” with a retheme of Disney’s animated classic, The Princess and the Frog (2009).

Disney announces, “Tiana’s Bayou Adventure is coming to Magic Kingdom Park in Florida and Disneyland Park in California in late 2024. Guests are joined by a cast of friends – new and familiar – as they prepare for their first-ever Mardi Gras performance. Much like the story unfolding within the attraction, our team’s own journey has been enriched with a bit of magic and some help from our friends.”

“To ensure this experience authentically reflects the real-life inspiration of Tiana’s story, Imagineers have consulted and collaborated with a host of academics, musicians and artists across the New Orleans region.”

RELATED: The Secret to a More Magical Ride on Splash Mountain

The Walt Disney Imagineering project team looked for local inspiration and was drawn to the work of the talented artist, Sharika Mahdi. Disney’s commissioned series “will serve as a source of inspiration to the Imagineers responsible for bringing Tiana’s story to life.”

While we have seen other art renderings provided by Walt Disney Imagineers for the new “Tiana’s Bayou Adventure,” this new inspiration artwork for the attraction could mean we can expect to see some jazz-playing amphibians:

Disney notes, “It was here that we were treated to a tour of her studio and a first look at the second piece of artwork commissioned in this series: a jazz club scene with an ensemble of affable amphibians.”

You can hear from Sharika Mahdi as she talks with Disney Imagineer, Charita Carteron, on her thoughts about Princess Tiana and the inspiration behind her artwork:

We will be sure to share more with our Disney Tips readers as we learn details over the next couple of years as Disney works to transform Splash Mountain into the new attraction, Tiana’s Bayou Adventure by late 2024.

2022-08-23
Jamie Sylvester
Previous: Did Disney World Increase Its Capacity or Are the Crowds Finally Letting Up?
Next: The Newest Tiki Mug at Trader Sam’s Is a Must-Have for Disney Collectors