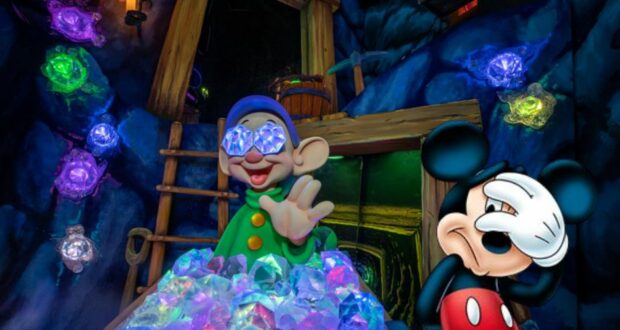 You just never know what will go viral next in the Disney bubble! A recent video is spreading on social media as it shows a Guest shamelessly attempting to steal a $100 bill from a Disney Park attraction with the help of his belt.

With the massive amount of Guests visiting Walt Disney World Resort and Disneyland Resort, every now and then, someone will capture poor Guest behavior that leaves us scratching our heads. From a Guest spraying cheese on Big Thunder Mountain Railroad to Guests misbehaving on “it’s a small world,”… the bad decisions seem to keep coming!

The latest video is captured at the entrance of Disneyland Park’s newly updated attraction, Snow White’s Enchanted Wish. This slow-moving ride features the classic film Snow White and the Seven Dwarfs (1937) and has a beautiful queue that allows Guests to enter into the storytelling before they even board a ride vehicle.

As Guests enter the line, the fairytale begins. The queue shows Snow White’s bedroom chamber within the Evil Queen’s Castle. Guests can look down into the chamber to see Snow White’s room. This chamber tends to be a popular spot for Guests to toss coins to make a wish.

But, when one Guest spotted a $100 bill in the chamber below, they attempted to steal the money with the incident captured on video.

@versacevibez took to social media to share a video noting, “Someone dropped a $100.” In the video, he includes, “When you spot a $100 in Snow White’s Scary Adventure.” Check out the video below:

What some Guests may not know is that Disney Park’s wishing coins go to the Make-A-Wish Foundation, which The Walt Disney Company is a huge supporter of.

Furthermore, as several noted in the video comments, this is a way to easily get banned or removed from the Disney Park if Cast Members were to spot Guests attempting to do this. We’d recommend NOT attempting to steal money from Disney!

Haven’t been on Snow White’s Enchanted Wish just yet? Disney describes the experience as “Follow the Fairest of Them All:”

Settle into a wooden mine cart and accompany Snow White as she flees from the evil Queen.

Begin your fairytale journey in the cozy cottage of the Seven Dwarfs, then visit dazzling mines filled with glowing gems. Soon you’ll be riding into the Queen’s sorcery chamber and discovering a magic mirror just as Snow White bites into a poisoned apple!

When all looks lost, will Snow White find her own happily ever after?

2022-09-20
Jamie Sylvester
Previous: The Disney Parks Collector’s Items You Need To Invest In
Next: You Can Take Home This Iconic Magic Kingdom Decor! (While Supplies Last)