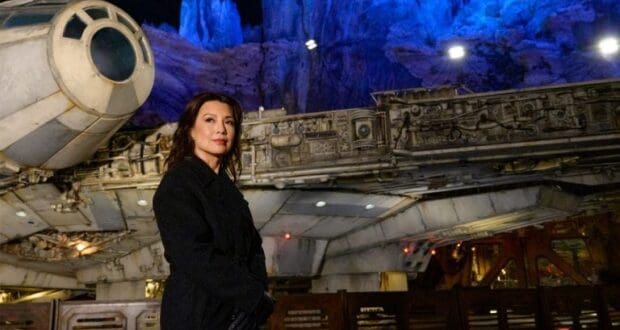 Disney Legend Ming-Na Wen is currently known for her role as Fennec Shand in ‘The Book of Boba Fett’, but animation fans have admired her work for decades. She voiced the title character in 1998’s ‘Mulan’, a role that she has reprised many times since.

Before her journeys once again take her to a galaxy far, far away, Disney Legend Ming-Na Wen recently dropped by the Disneyland Resort to celebrate the holidays and the release of the all-new original series in which she stars, “The Book of Boba Fett” exclusively on Disney+.

During her visit, Ming-Na also stopped by the Downtown Disney District to sit in the replica of the iconic throne featured in “The Book of Boba Fett.” You can follow in the footsteps of legendary bounty hunter Boba Fett and mercenary Fennec Shand and feel the legacy and power that comes with being the leader of the galaxy’s underworld. The Boba Fett throne photo location is located outside of the entrance at the Star Wars Trading Post in Downtown Disney District for a limited time.

Watch below for how Ming-Na enjoyed her recent trip to Disneyland Resort and lived her own Star Wars adventure at Star Wars: Galaxy’s Edge.

Continue the Star Wars adventure at home and watch “The Book of Boba Fett” now available to stream on Disney+ today!