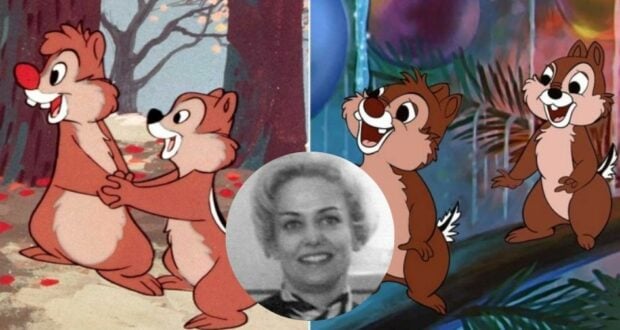 Norma Swank-Haviland, a former talented Disney animator and voice actor for the beloved Disney character Chip of Chip ‘n’ Dale, passed away in early April 2022 at the age of 97-years-old.

According to a report from Cartoon Brew, The Three Caballeros (1944) was her very first Walt Disney Studios feature work where she was noted saying, “That particular picture had a lot of feathers. That was a little difficult for a beginning painter with all those little pointy things!”

Swank-Haviland’s talents grew with the Walt Disney Studios from animator art to voice acting work. She was known for the early voice of Chip, Disney fans’ favorite black-nosed chipmunk. Chip ‘n’ Dale debuted in 1943 with a short called Private Pluto which later grew to more Chip ‘n’ Dale theatrical shorts in the mid-1940s.

Even though the voice of Chip is normally credited to Jimmy MacDonald (the head of the sound effect department at the time), women such as Norma Swank-Haviland from the animation department were commonly used to perform voices that went uncredited in the films. Both MacDonald’s and Swank-Haviland’s voices can be heard in Chip ‘n’ Dale shorts of the 1940s-50s.

Here’s a clip with Swank-Haviland’s voice as Chip:

Sadly, Swank-Haviland was one of the last surviving artists who worked at Walt Disney Studios during the 1940s. She retired from Disney in 1971. We’re thankful for all the amazing works she left behind!