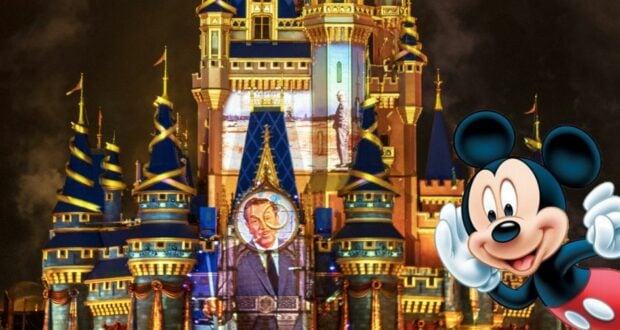 Grab the tissues! Disney has heard the plea of its fans and has put “Walt” back in Walt Disney World Resort. That’s right, an all-new intro to the Magic Kingdom Park nighttime spectacular “Disney Enchantment” now features the man that began it all, Walter Elias Disney.

Walt Disney World Resort is in the midst of its 50th Anniverary celebration titled “The World’s Most Magical Celebration.” When the celebration launched on October 1, 2021, Disney fans were eager to see the new nighttime fireworks and projection that would replace the former “Happily Ever After.”

Unfortunately, when “Disney Enchantment” took the stage on October 1, Disney Park Guests were quick to share their disappointment. Many have asked for the return of “Happily Ever After,” while others wanted to simply see something related to the 50th Anniversary of the theme park within the new nighttime spectacular.

Furthermore, fans have felt that the man that created it all, Walt, is slowly being removed from “Walt Disney World.” But, fast forward to August 22, 2022, and Disney has made it clear they are putting the “Walt” back in Walt Disney World.

While there were rumors and glimpses of testing videos, Disney shocked Park Guests on August 22 with an all-new intro to Disney Enchantment which features Walt and even his brother, who finished the Walt Disney World project, Roy Disney.

Disney shared new images along with the message, “Disney Enchantment at Magic Kingdom Park at Walt Disney World Resort in Lake Buena Vista, Fla., now shimmers like never before in celebration of Walt Disney’s vision and 50 years of magic.”

@ScottGustin took to social media to share clips of the new introduction he deems “Waltchantment,” which portrays a beautiful dose of Walt Disney World’s beloved history… a perfect addition for 50th Anniversary fireworks!

Check out the videos below:

Beautiful! We are HUGE fans of the updated Disney experience and think Disney did a great job implementing Walt and Roy into the nighttime spectacular.

If you haven’t seen Disney Enchantment yet, Disney notes, “An Incredible Journey Awaits,” with the description:

“Watch in awe as Cinderella Castle comes to life with magical effects that—for the first time ever—extend down Main Street, U.S.A.! Plus, enjoy dazzling new lighting that illuminates the Castle courtyard and stunning fireworks that light up the night sky. All the while, classic and reimagined Disney songs will sweep you up into the adventure of a lifetime, along with an original new song by 7-time Grammy award-winning songwriter Philip Lawrence.”

“Disney Enchantment, presented by Pandora, is truly a celebration of magic, imagination, joy and hope for all who carry dreams in their hearts. Throughout your journey, favorite Disney Characters like Raya, Moana and Joe Gardner from Soul will join as you explore a world of wonder filled with friendship, love and fun. And if darkness tries to hold you back, you’ll discover you only have to look within to find the power to believe and make your dreams come true. The magic has been inside you all along!”

Thank you, Disney! We’re thrilled the nighttime spectacular for Walt Disney World’s 50th Anniversary finally features the reason for it all, Walt Disney himself.

2022-08-23
Jamie Sylvester
Previous: Ways to Create Magic For Disney Cruise Line Cast Members
Next: Did Disney World Increase Its Capacity or Are the Crowds Finally Letting Up?