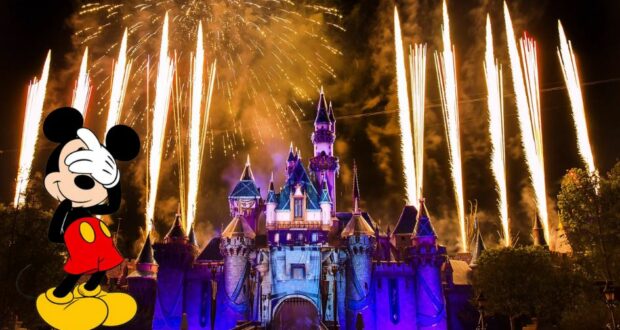 It’s been a fantastic day at the Disney Park! As the sunsets and the night crawls in, Guests gather on Main Street, U.S.A. to prepare for the magic of a Disney nighttime spectacular and fireworks show. But, Disneyland Resort Guests were in for a surprise when music from the wrong fireworks show began playing.

Over at Walt Disney World Resort, fireworks have been a hot topic among fans at Magic Kingdom Park. Many fans wish Disney would return the beloved “Happily Ever After” nighttime spectacular as the new 50th Anniverary, “Disney Enchantment,” isn’t impressing Guests. While Disney has finally attempted to add Walt and Roy Disney into the fireworks show, fans are still eager for a change.

But, on the evening of August 28, the talk of fireworks hit Disneyland Resort in California. A video captures a fireworks music mistake by Disney as lasers fill the theme park sky over Sleeping Beauty Castle.

@ScottGustin took to social media to share, “Well this is fun. Disneyland apparently goofed and played music from the wrong fireworks show. This intro is from Fantasy in the Sky.”

@DVacationer shows another video showing the fireworks being stopped, with Disney announcing the show was being delayed. You can hear the questions from the crowd trying to figure out what Disney music was being played:

The music being played was the intro from Disneyland Park’s fireworks display known as “Fantasy in the Sky.” According to D23:

“Fantasy in the Sky Fireworks show at Disneyland that debuted in 1956. The fireworks are timed to coincide with the musical sound track being played throughout Disneyland. Tinker Bell began her nightly flights from the top of the Matterhorn and above Sleeping Beauty Castle in 1961 as part of the show. The Disneyland show was changed to Believe… There’s Magic in the Stars for the park’s 45th anniversary in February 2000. Walt Disney World Magic Kingdom Park had a Fantasy in the Sky fireworks show since 1971; it was changed to Wishes: A Magical Gathering of Disney Dreams in October 2003 and Happily Ever After in May 2017.“

As mentioned in the tweet by @DVacationer, could Disneyland be preparing the Fantasy in the Sky introduction for the Walt Disney Company’s 100th anniversary in 2023?

We will be sure to keep readers at Disney Tips updated as we learn more about this hiccup – as well as if any truth comes to the possible return of “Fantasy in the Sky.”