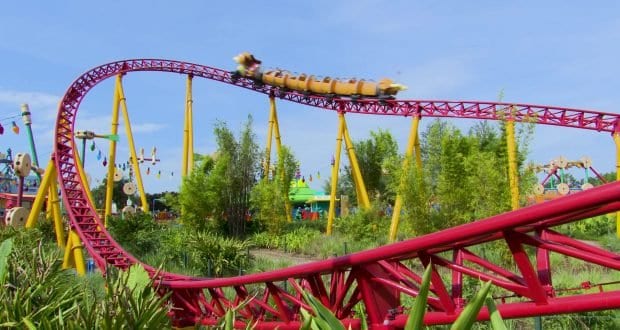 Really, it’s hard not to have a fun time at a Disney park. That said, doing a bit of planning can increase that fun by quite a lot. This is especially true right now, as so many things have changed due to the pandemic—and it’s even more true at Hollywood Studios, where many new rides and attractions have opened, changing things even more. What does all this mean for you? Only that you should know a few things before heading into Hollywood Studios so you can have the best time possible. Lucky for you, we’ve listed the 10 most important things to know before making a trip to this park.

The first and most important thing to understand is that, because of those aforementioned new rides and attractions, Hollywood Studios is Disney’s hottest park right now. This means the park reservations that are currently required in addition to a valid park ticket are being snatched up incredibly quickly. Be sure to grab yours as soon as you know you’re going.

2. Rise of the Resistance Has a Virtual Queue

Rise of the Resistance is one of the newest rides in Disney World and it is very, very popular. For this reason, Disney has made the decision to make the queue for this attraction a virtual queue, meaning you have to snag a spot in line on the Disney app and then wait for your boarding group to be called later in the day. Currently, boarding group spots are released at 7am and 1pm and are gone within seconds after being released. Not kidding. While guests can snag a reservation during the 7am drop from wherever they are, they must be in the park in order to try at 1pm.

3. There are No Pre-Shows

Tower of Terror and Mickey and Minnie’s Runaway Railway have some of our favorite pre-shows in all of Disney World. Unfortunately, in order to maintain social distancing, Disney has opted to get rid of these pre-shows for the time being.

4. Some Live Shows are Closed

In addition to some missing pre-shows, you will also notice that many of the park’s live shows are closed right now. If you usually look forward to the Indiana Jones Stunt Spectacular, Voyage of the Little Mermaid, or Beauty and the Beast, you will want to find other attractions to look forward to for this particular trip. We recommend the Frozen Sing-Along as a replacement for the princess shows.

In the past, one of the best ways to skip the super long lines for Rock ‘n’ Roller Coaster and Millennium Falcon: Smuggler’s Run was to hop in the single rider line. Unfortunately, this isn’t an option right now. This means you’ll be stuck waiting in the regular line, so plan on taking a bit longer at these attraction than you might have otherwise.

6. Mickey and Minnie’s Runaway Railway is a Must-Do

The newest ride in all of Disney World, Mickey and Minnie’s Runway Railway is a must-do for visitors of all ages. It is seriously adorable and the technology, creativity, and artistry presented throughout the ride are all equally astounding.

While Mickey and Minnie’s Runaway Railway is incredibly popular, the line for this one seems to move pretty quickly and there are usually times throughout the day when the wait is as little as 45 minutes. Millennium Falcon: Smuggler’s Run and Slinky Dog Dash are another story. These two rides can see some seriously long wait times, especially in the afternoon. Therefore, we recommend arriving at park opening and riding both of these before anything else.

If you find yourself looking for things to do as you wait for the lines for the headliner attractions to drop a bit, keep in mind the fact that this park has some really great “filler rides” (i.e. less popular rides with shorter waits). We really love Toy Story Mania, and since it’s no longer the center of attention, the wait times are almost always reasonable. Alien Swirling Saucers and Star Tours are also great options.

9. Watch for Characters on Hollywood Boulevard

In the other Disney parks, you’re almost guaranteed to see a character cavalcade or two while visiting during daylight hours, no matter where you are. Unfortunately, Hollywood Studios is a bit different in that the mini-parades here only travel down Hollywood Boulevard and then go backstage beside Star Tours. For this reason, you will need to hang around on Hollywood Boulevard if you wish to see characters. Luckily you typically don’t have to wait very long!

10. Eat at Hollywood and Vine

Last but not least, we must mention the new and improved Hollywood and Vine restaurant. In the past, we’ve mentioned our dislike of this plain and boring buffet. These days, the food is enough for the table and is much more flavorful and interesting. On top of that, choosing to have one of your meals here means more (socially distanced) time with characters, and that’s never a bad thing.

There you have it: 10 things you should know before visiting Hollywood Studios. Keep these things in mind as you plan your day and you’re sure to have a fabulous time exploring this amazing park and all of its new lands and features.