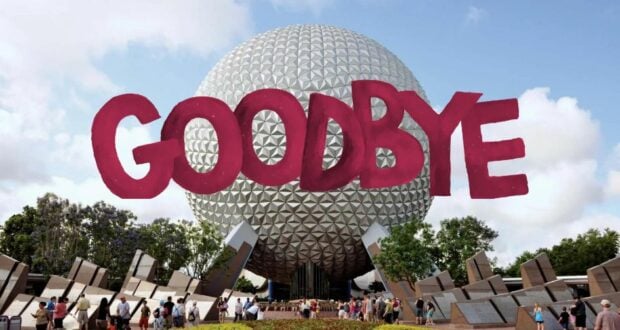 Walt Disney said it best… “We keep moving forward, opening new doors, and doing new things, because we’re curious and curiosity keeps leading us down new paths.” As a Disney Park fan, however, change can be difficult!

Walt Disney World Resort is amidst its massive overhaul of the beloved EPCOT theme park. The Disney Park is undergoing a multi-year transformation, with much of the Park under construction or experiencing a change in one way or another.

The former Future World, which had a Future World West and a Future World East, now consists of World Celebration (the Park entrance and location of EPCOT’s iconic Spaceship Earth), World Discovery (Test Track area with the new Guardians of the Galaxy: Cosmic Rewind), and World Nature (includes The Land Pavilion and future Journey of Water Inspired by Moana).

As Disney rolls out the welcome mat for these new neighborhoods, Guests are noticing all signs of Future World are disappearing. One Disney fan took to social media to share photos at the exit of The Seas with Nemo & Friends attraction. The former sign said “Exit to Future World,” but has now been changed to “Exit to World Nature.”

@DreamfinderGuy notes, “RIP to another Future World sign, just one day away from making it to the birthday.” (EPCOT’s 40th anniversary was October 1, 2022.) He also shares “The war on Future World is upon us,” with before and after images of the EPCOT Friendship boat dock:

Goodbye, Future World! Change is difficult, but we do have full confidence in Disney that what is to come for the former Future World space will be full of exciting experiences in the near future.

As always, we will be sure to keep Disney Tips readers updated as we follow along with the progress of EPCOT’s multi-year transformation.