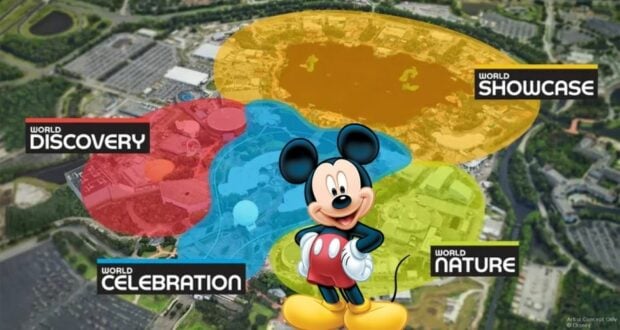 Long gone are the days of EPCOT being divided into two sections known as Future World and World Showcase. Progress on EPCOT’s four neighborhoods is moving right along.

At the 2019 D23 Expo, The Walt Disney Company announced EPCOT would be undergoing a massive transformation. While we were unsure at first, we must say the progress unfolding at EPCOT is taking our love for the Disney Park to new levels.

As of October 1, 2021 (Walt Disney World Resort’s 50th Anniversary), Disney has dropped the EPCOT area named “Future World” altogether. Instead, Disney has introduced the development of four “neighborhoods” that will entertain and welcome Guests to the beloved theme park.

While World Showcase will keep its name, the former Future World is undergoing a transformation with its new neighborhoods including World Celebration, World Nature, and World Discovery. Despite several construction walls still present, the four “World” neighbors seem to be well underway to a seamless connection.

Let’s check in on the neighborhoods’ progress!

First up, the oldie but goodie – World Showcase. World Showcase still consists of eleven Pavilions which encircles the World Showcase Lagoon and focuses on the “celebration of culture, cuisine, architecture, and traditions”. As you stroll the World Showcase you’ll find plenty of restaurants, shops, and entertainment with a few attractions sprinkled into the mix.

The biggest addition to the World Showcase most recently has been the stunning expanded France Pavilion. The expansion has allowed for the addition of the attraction called Remy’s Ratatouille Adventure, along with a new quick-service and table-service restaurant called La Crêperie de Paris. The France Pavilion also boasts a Beauty and the Beast Sing-Along which is a film presented in the Impressions de France theater.

Over in The American Adventure pavilion, we’ve seen the addition of Regal Eagle Smokehouse: Craft Drafts & Barbecue, a fast-casual restaurant. PLUS – let’s not forget the addition of the new nighttime show, “Harmonious” which lights up the World Showcase nightly with fantastic projections and fireworks.

With all the excitement in the World Showcase, we’re still eagerly awaiting future development on the initially proposed Mary Poppins-themed area and attraction which according to Disney CEO Bob Chapek may still be on the horizon.

Next up, let’s head to the front of the Park where World Celebration now greets Disney fans entering EPCOT at the main gate.

Disney recently moved the Leave a Legacy platforms to a different portion of the Park to make way for a clean entrance which allows Spaceship Earth to be the show stopper!

Guest are now greeted with an EPCOT entrance plaza that boasts open green spaces along with a new fountain that is situated at the base of Spaceship Earth. You’ll also spot flags in this space that feature the six original EPCOT icons.

While Disney has seemingly put a hold on the Spaceship Earth attraction reimagining, the icon is still a focal point as a Beacon of Magic at night. New lights shimmer from the massive ball in the most stunning way as they dance along to the perfectly timed music. Be sure to take some time out of your day to enjoy the Beacon of Magic!

World Celebration now holds the flagship merchandise location for the Park named Creations Shop. Creations Shop is somewhat like the old MouseGears shop but is larger and well spread out with excellent EPCOT and Disney Parks merch.

And yes, thank goodness! Club Cool Hosted by Coca-Cola has made its glorious return! You can still sip on random Coke products from around the globe. Plus, a new quick-service restaurant called Connections Cafe & Eatery has opened in this neighborhood.

Once you pass Spaceship Earth, soon enough, you’ll be able to stop and spend a moment with Walt. That’s right, Walt Disney said EPCOT “would always be in a state of becoming” – and that’s exactly why Disney Imagineers have planned for a new Walt statue at EPCOT called Dreamers Point.

World Nature currently has some of the most construction walls as Disney is hard at work creating a first-ever Moana (2016) inspired attraction.

Disney has said, “Journey of Water, Inspired by Moana” will be a “lush exploration trail” that “will invite Guests to meet and play with magical, living water.” We’re super curious to learn more about this experience but are enjoying photos of its progress as it comes to life.

We can’t leave out the fairly new but often overlooked “Awesome Planet” show located in the Land Pavilion. While many Guests rush off to Soarin’ or Living With the Land attractions, be sure to take a moment to watch Awesome Planet, a 10-minute show about the “beauty, diversity and dynamic story of Earth.”

Last but not least, and coming in STRONG… hello World Discovery! We have a feeling this neighborhood is going to be the next big thing at Walt Disney World Resort.

First up, if you haven’t already, do your best to snag a dining reservation at Space 220 Restaurant. This new table-service restaurant offers a unique dining experience… in outer space. Well, it’s not REALLY outer space, but the “elevator” to space and the massive screens make the outside look like space, giving diners the impression that they are 220 miles above the planet’s surface. The food, the drinks, the atmosphere… it’s all out-of-this-world (see what we did there?!).

The big draw to World Discovery is the first-ever EPCOT roller coaster – Guardians of the Galaxy: Cosmic Rewind. The attraction opened on Memorial Day weekend in 2022 and has been well-reviewed and has become an instant success among Disney fans. The 360-degree rotating coaster is “family-friendly”, but be sure to take note of its height requirements. We’ve loved seeing this attraction take shape, and now being able to ride it is an EPCOT highlight.

EPCOT’s four neighborhoods are progressing along beautifully! While Disney Imagineers have had to battle COVID closures, we believe the forward momentum will result in an unbelievable Park Day at EPCOT in the very near future.