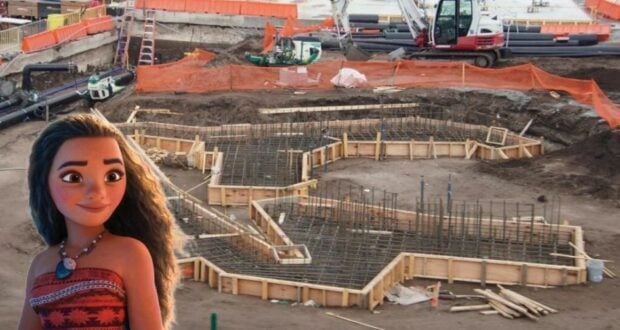 We’ve said goodbye to the former Future World, as EPCOT’s four neighborhoods including World Celebration, World Discovery, World Nature, and World Showcase are all welcoming new and returning Disney experiences. While much of the focus right now is on World Discovery and the grand opening of Guardians of the Galaxy: Cosmic Rewind hopefully launching Memorial Day weekend, we’re shifting over to World Nature where Moana is taking center stage.

We’re thrilled to see that the popular Walt Disney Animation Studios film is getting the recognition it deserves as Walt Disney World Resort Imagineers work to construct the intriguing “Journey of Water, Inspired by Moana” attraction.

The World Nature neighborhood is “dedicated to understanding and preserving the beauty, awe, and balance of the natural world.” With its neighbors including The Land and The Seas with Nemo & Friends pavilions, the forthcoming Journey of Water, Inspired by Moana will be a welcomed addition.

Disney has only shared one concept art rendering back at the 2019 D23 Expo with the description of the new attraction as, “Journey of Water, Inspired by Moana will be the first Disney Parks experience evoking the hit Walt Disney Animation Studios film. This lush exploration trail will invite guests to meet and play with magical, living water. Just like Moana’s friend the ocean, water will have a personality of its own, helping Guests learn how to protect the natural water cycle in a fun and engaging way.”

As of March 12, 2022, we’re starting to see the Moana experience take shape at EPCOT! @bioreconstruct took to Twitter to share several construction photo updates leaving us thrilled to see progress.

First up, @bioreconstruct shares the below photo with the notes, “Odd to see Disney cloaking devices or shrubs on wheels, staged in the Journey of Water construction site. These shrubs tend to be used to block Guest view or access temporarily.”

In the below photo, check out the massive piping installed, likely for water circulation in Journey of Water.

The attraction goes vertical as a steel frame has been raised on the EPCOT worksite!

Check out the two photos below with show a collection of concrete forms staged in the Journey of Water site.

Check out the groundwork here! @bioreconstruct notes, “A set of concrete forms in the Journey of Water site. Notice there is taller rebar at right.”

Excellent progress! Disney has yet to release an opening time frame for Journey of Water, Inspired by Moana, as COVID closures have slowed progress on several Disney Park attractions such as TRON Lightcylce Run at Magic Kingdom Park. We will however be sure to share any further details as soon as Disney reveals them about this new Moana attraction!