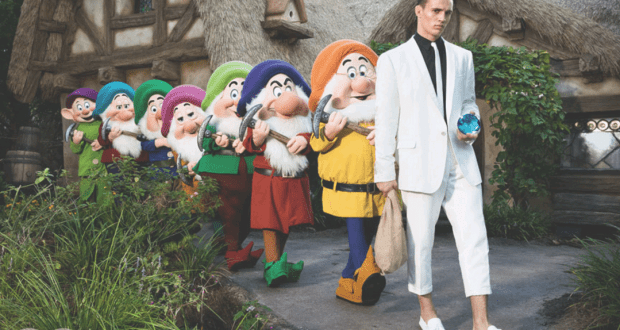 For the first time ever, Walt Disney World was the location for a men’s fashion photo shoot.  GQ Style magazine held the photo shoot throughout Magic Kingdom in front of attractions and icons located in the park.  The shoot was styled by style editor, Luke Day and the photographer was Doug Inglish.  The pictures were taken in front of Cinderella Castle, Seven Dwarfs Mine Train and Storybook Circus.  The photo shoot even included shots with Donald Duck and the Seven Dwarfs themselves.

The photos were included in the summer issue of GQ Magazine, which is currently on sale now.  This was the first time that Disney was the host for such an event, and the pictures turned out amazing.  We always love the opportunity to see Disney photography and Disney featured throughout different publications, so it is really neat to see a fashion shoot.  It is a perfect backdrop, and makes for a really fun shoot.

What do you all think of the GQ photoshoot?

Photo and Source Credit:  The Disney Blog and GQ Magazine