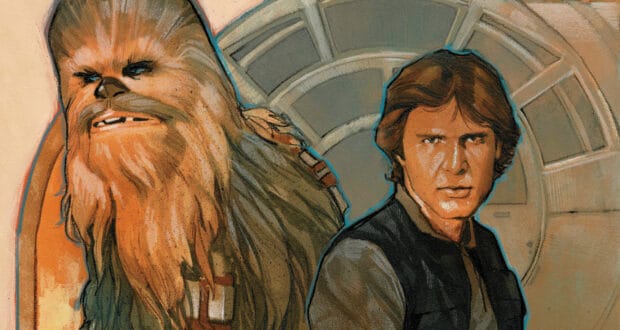 ‘Star Wars’ and Marvel comic fans are in for a treat in March, 2022. That’s when the new series, ‘Han Solo & Chewbacca’ will debut!! Dan Brooks and StarWars.com recently sat down with Marc Guggenheim, and here is what they had to say:

The galaxy’s greatest smuggler and his Wookiee co-pilot are taking on a new job: starring in their own comic.

Han Solo & Chewbacca, a new series from Marvel, will launch in March 2022, StarWars.com can exclusively reveal. Written by Marc Guggenheim and pencilled by David Messina, the monthly comic follows Han and Chewie a few years before the events of Star Wars: A New Hope, as the duo teams up with Greedo — in better times, apparently — on a heist for Jabba the Hutt. StarWars.com caught up with Guggenheim to talk about the tension within Han, what he has planned for our favorite nerf herder and walking carpet, and how Star Wars changed his life.

StarWars.com: The story takes place pre-Episode IV, but post Solo — a time in Han’s life that has yet to be explored. How do you view him at this point?

Marc Guggenheim: It’s interesting because the cornerstone of Han’s character is that he wants to be a jerk, a selfless criminal, but has this idealistic streak that always gets in his way. He aspires to cynicism, but deep down, he’s a hopeless romantic at heart. Now, you might think that that inner conflict didn’t present itself until the end of Episode IV, when Han returns to help Luke destroy the Death Star, but it’s already on full display at the end of Solo: A Star Wars Story, which, of course, predates Episode IV. So one of the things I’ve been playing with is the tension between the “hopeless romantic” Han reveals himself to be at the end of Solo and the hard-bitten cynic we meet in Episode IV. To be very reductive about it, I’ve searched for opportunities to force Han to choose between his lesser and greater angels.

Marc Guggenheim: Chewbacca’s been alive hundreds of years longer than Han. He tries to offer Han the benefit of his experience, to offer a more evolved perspective on things, but Han usually goes his own way. And the thing is, Chewie is just fine with that. He’s good to go with the flow and let Han call the shots because he knows that, no matter what, Han’s got his back. Chewie’s an interesting character to write, obviously, because he only speaks Shyriiwook, so a lot of this I have to get out by dint of the circumstances Han and Chewie find themselves in, as well as Han’s reactions to what Chewie is saying.

I’m gonna be doing a future issue exclusively from Chewbacca’s point of view, so that should be a lot of fun. Hopefully, we can get into Chewie’s head in a way we never have seen before.

StarWars.com: What can you tell us about the kickoff story and Han’s journey in it?

Marc Guggenheim: At its most basic, the story is Butch Cassidy and the Sundance Kid but with Han and Chewie as Butch and Sundance. In the first issue, Jabba the Hutt gives them what should be an easy job: Steal something and bring it back to him. But the job turns out to be anything but easy as everything that can go wrong promptly does. I’ve structured the story such that each issue ends with some kind of cliffhanger. Sometimes, it’s a revelation; other times it’s placing Han and/or Chewie in an impossible spot, but either way, each issue ends with a plot reversal that drives you to the next issue. I’m particularly excited about the last page of issue one. The story takes a turn that, if I’ve played my cards right, is completely inevitable yet totally unexpected. Either way, it’s definitely going to have people talking.

StarWars.com: The Star Wars underworld has proven to be really ripe for storytelling, especially the last few years. How have you enjoyed playing in that sandbox?

Marc Guggenheim: So, so much. The seedy underbelly of the galaxy is just such a rich playground for interesting characters and stories, particularly with all the lies, double-dealing, and double-crosses. And then when you place Han and Chewie into the middle of all that, you get some really exciting drama. I love the fact that Han and Chewie are really the only two people in the galaxy the other trusts. They have each other’s backs, always and forever, and that relationship is beautifully contrasted with all the scum and villainy their job requires them to deal with.

StarWars.com: In terms of character appearances, are you trying to stick to who and what we know in Solo/A New Hope eras, or are you hoping to bring in some surprise appearances and expand?

Marc Guggenheim: Whenever I work with someone else’s intellectual property, I always strive to have my cake and eat it too. It’s Star Wars, so of course I want to play with the toys in the toy box. For example, in issue one, Jabba sends Greedo on the job with Han and Chewie, and we get a better sense of why there’s so much animosity between them in Episode IV. T’Onga from Bounty Hunters is also part of the story, along with a few other characters who have been established in the comics. Then there’s the character who we meet at the end of issue one, who no one will see coming.

At the same time, I always like to make some contributions of my own, so the series will also introduce a few new faces, including a “Marshal” — think the corporate equivalent of a bounty hunter — who is going to be hunting Han and Chewie and be a real thorn in their side. That character’s my tip of the hat to the “super posse” in Butch and Sundance and they’re simply a blast to write. David Messina has come up with an incredible, iconic design for them that’s going to blow people away.

StarWars.com: It’s hard to believe, but this is actually the first Han and Chewie series ever. How does it feel to be at the helm?

Marc Guggenheim: It feels incredible. My father took me to see Star Wars when I was six years old. I thought he was taking me to see The Bad News Bears and I will never forget the moment that the Star Destroyer flew overhead and I realized I was most definitely not watching a comedy about a bunch of misfit kids playing baseball. It’s one of the most seminal moments in my life, a moment that I can honestly say changed my life. All of which is a long way of saying that writing this book is like a hundred dreams come true for me. I’m really putting my back into it. I want to leave it all out on the field and have no regrets when I write “the end” on the last issue.