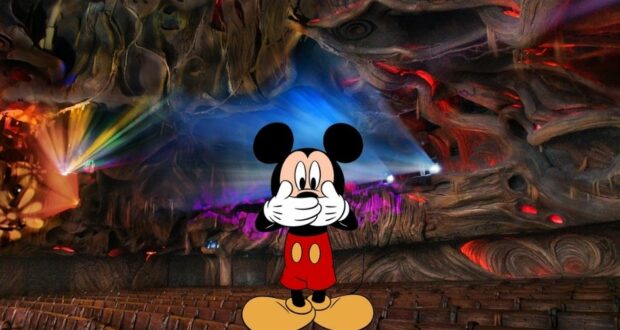 Disney’s Most Disturbing and Grotesque Attraction

It’s a beautiful day at Walt Disney World Resort as you set off on an adventure to explore the Disney Parks. But, is Disney really all pixie dust and sunshine? There’s a rather disturbing attraction nestled in the heart of Disney’s Animal Kingdom.

The iconic Tree of Life stands stunningly over the Disney Park as Guests rush in for popular Animal Kingdom attractions such as Avatar Flight of Passage in Pandora and Expedition Everest in Asia. But, there is one attraction in Discovery Island we never skip despite its grotesque experience.

This disturbing attraction has one of the best Disney attraction locations in all of Walt Disney World as it is positioned within the massive Tree of Life. Guests take a short walk through a Tree of Life path and end up INSIDE the Park icon to experience the attraction, “It’s Tough to be a Bug!“.

Inspired by the Disney and Pixar animated film, A Bug’s Life (1998), Guests are welcomed into a 3D theater to experience a show about… well, BUGS!

Guests take a seat and are welcomed by beautiful butterflies on the screen following a pleasant greeting from the bug show host, Flik, the blue ant, and the film’s protagonist.

Flik goes on to share that bugs makeup 80% of the animal world and invites Guests to put on their bug eyes (3D glasses) to become “Honorary Bugs” for the show.

While all seems to go well at the beginning, things start taking a turn for the worse rather quickly as a tarantula spider enters the stage and begins shooting poison quills at the audience. The loud wind blasters shoot toward the audience.

Next up, a soldier termite enters the stage and announces he must defend himself from intruders. As a result, he sprays the audience with acid! Little drops of water are shot at Guests until the termite runs out and threatens he’ll be back.

Just when you think you get a moment of rest, a stink bug is introduced as being “silent but deadly”. She points her rear right at the audience and blows a nasty, stinky cloud of smelly fog into the crowd.

As soon as the smell clears, the massive animatronic, Hopper (the cricket villain in A Bug’s Life), jumps out and loudly starts shouting at the audience about how terrible humans are.

This is where it gets CRAZY and there is usually a mass exodus of young children screaming as their parents try to navigate the darkness to the exit!

Hopper is ready to initiate WAR on the humans with fly swatters which make for loud snaps with air cannons at the audience. The lights go out as a huge bug spray can fills the room with smoke.

Hornets begin attacking as the buzz is heard throughout the theater. Actual pokes come out from the back of your seat and poke the Guests in the back. The surprise attack even has a few adults yelling!

But wait, that’s not it. Next, massive black widow spiders with scary glowing eyes drop from the ceiling directly above the audience’s head which makes for a creepy crawling feeling all over.

Thankfully, just as it’s starting to get out of hand, a lizard comes out and snatches up Hopper. Of course, the loud 3D lizard tongue is snapping toward the audience as Hopper tries to fly away.

With Hopper gone, Flik enters the stage once again and Guests are left with a musical number that introduces dung beetles rolling in on large balls of waste, along with a massive moldy cupcake with maggots crawling all over it just inches from your face.

The show is over. You can take a deep breath… well until Flic allows all bugs to exit the theater first which makes for the feeling of bugs crawling under your bottom as you sit in your seat!

It’s all… DISTURBING! BUT – we still can’t get enough of the show and its surprising features. While the show is 3D, so you really need to be there to experience it, here’s a full show video to watch along:

Disney describes the attraction as an “Off-Bugway” Show:

Become an honorary insect as you take your seat in the theater hidden at the base of the Tree of Life and don a pair of “bug-eye” glasses. Enjoy a delightful 3D movie and live show hosted by Flik, the loveable ant from A Bug’s Life, and learn how insects survive in the wild.

Bug Out! During the show, dodge flying quills from a tarantula, feel a harmless spray from a soldier termite, and sniff the putrid “defense stench” from a stink bug. When Hopper—the grasshopper villain from A Bug’s Life—unexpectedly shows up, the theater goes bug-wild!

The moral of the story? It really is tough to be a bug. With dazzling 3D movie effects, Audio-Animatronics figures and in-theater 4D surprises, this is one show you’ll be buzzing about for a long time.

Take note, “It’s Tough to be a Bug” is a dark, loud, and scary experience that may be too much to handle for little ones!