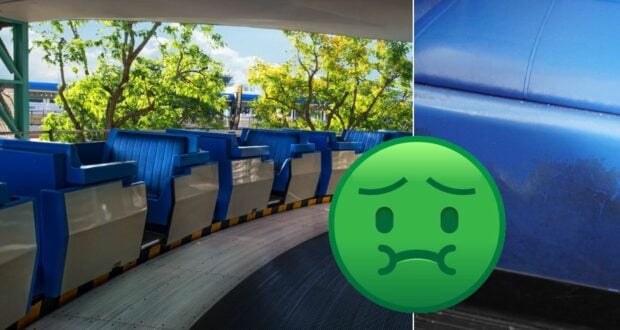 It’s time to head to Walt Disney World Resort! While many first-timers at Magic Kingdom Park rush down Main Street, U.S.A., and off to Seven Dwarfs Mine Train or Space Mountain, it’s not uncommon for Disney Park regulars to focus on the slow-moving, iconic Magic Kingdom attraction, Tomorrowland Transit Authority PeopleMover.

Even though PeopleMover has had its ups and downs with lengthy refurbishment and regular break downs, Disney fans can’t help but love this 10-minute tour of Tomorrowland aboard this “transit system of the future.”

RELATED: Looks Like Disney’s Classic PeopleMover Is Getting a Major Update

But, instead of seeing much of a future, one Guest recently captured photos of the much-worn theme park attraction with its rather disgusting appearance in excess filth.

@bioreconstruct took to social media to share the following photos, along with, “PeopleMover needs a cleaning. Accumulation on surfaces.” Check out the photos in the tweet below:

As you can see, that is a major build-up of yuck from Guests visiting the attraction time and time again. The reactions to the post and photos are in agreement with @bioreconstruct that PeopleMover indeed needs a cleaning.

One person notes with a gif, “Oh god…good thing I’ve still got plenty of anti-bac.”

There are plenty of “Eww” remarks, while some agree with the comment, “I’m just happy it hasn’t been shut down. I won’t complain.”

Keep in mind that while Disney is known for their legendary cleanliness, we have seen fewer Cast Members cleaning attractions and wiping down surfaces as all COVID-19 protocols have come to an end.

Disney describes PeopleMover as, “Move Above and Beyond:“

We adore this attraction personally, but, yes, a deep clean is much-needed Disney!