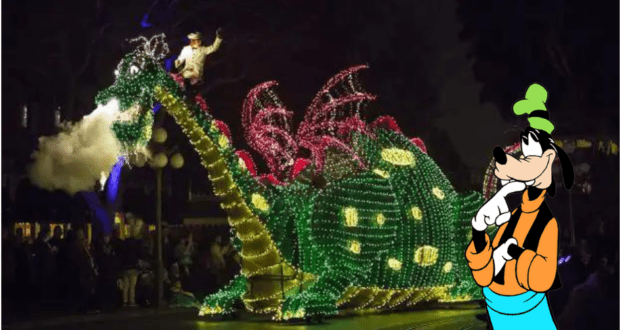 Parades and nighttime fireworks spectaculars, and the Electrical Water Pagaent have been some of the staples of evening entertainment at the Walt Disney World Resort over the course of its 50-year history. Many of these evening events have drawn crowds to the Parks, particularly the Magic Kingdom, since the Resort opened in 1971 as a way to get in some extra Disney magic before the day comes to an end.

While the Magic Kingdom has held a fireworks show nearly every night since opening on October 1, 1971, evening parades have come and gone over the years. This Disney Park, which in the past had hosted two light parades with the Main Street Electrical Parade and Spectromagic, has not had this type of evening entertainment for years. The final run of the Main Street Electrical Parade in the Magic Kingdom took place on October 9, 2016, and the Park has been without an evening parade ever since. While new projection shows before or after the fireworks (currently Disney Enchantment) have been added over the years, many fans have expressed how much they missed having a nighttime parade roll down the parade route from Frontierland to Main Street, U.S.A. and Town Square.

With the parade currently rolling towards its final performance at Disneyland Park, and with a peculiar shopDisney update, some fans have been wondering about the possibility of the parade coming to Walt Disney World. Here’s what we know so far. The strangest part of the new band is that MagicBand+ does not yet have a release date for when it will arrive at the Disneyland Resort, and it only just debuted in Walt Disney World, and yet shopDisney is selling a band with artwork from a parade that ends on September 1.

(Disney fans were also quick to point out some errors in the way shopDisney listed the band as referring to Disney’s Electrical Light Parade and the Main Street Electrical Parade as one and the same.)

In addition to the confusion over the name of the parade on the band, we feel that we have to consider the new elements that were added to the parade’s finale only for its final run. When the latest version of the parade returned to Disneyland, it featured a revamped finale float (formerly the ‘To Honor America’ sequence) that includes characters from more recent Disney films like Coco (2017) and Encanto (2021).

Disney could have updated the finale float simply to plus the parade before its final send-off, but we have to agree with fans that the new ending and all of the above, as well as the fact that this parade has ended multiple times, are making it seem not-so-final. So, could the parade come to Walt Disney World? We would not know unless Disney officially announces it, but our fingers are crossed! It is also possible that a nighttime parade (perhaps even the return of the Main Street Electrical Parade) was originally planned for the 50th anniversary of Walt Disney World, but changed due to COVID-19 restrictions. Maybe we will find out at this year’s D23 Expo, which takes place shortly after the end of the Main Street Electrical Parade in Disneyland?

New to the parade for its 50th anniversary is a magnificent grand finale float that celebrates the theme of togetherness, reflected in a design that brings together characters and moments from more than a dozen beloved Disney and Pixar stories. These stylized scenes—interpreted in thousands of sparkling lights and electro-synthe-magnetic musical sound—bring to light classic and contemporary favorites such as Encanto, The Jungle Book, Raya and the Last Dragon, The Princess and the Frog, Coco, Mulan and more. Inspired by both the design of classic Main Street Electrical Parade floats and Disney Legend Mary Blair’s art style on “it’s a small world,” the new grand finale float is one of the longest and grandest in the parade’s 50-year history!

We will continue to monitor any news on the Main Street Electrical Parade, and will be sure share updates of any changes here on DisneyTips.

2022-08-17
Brittany DiCologero
Previous: How Would You Like To Live In a Disney Inspired Community?
Next: When Walt Disney World Entertainment Goes South Midshow