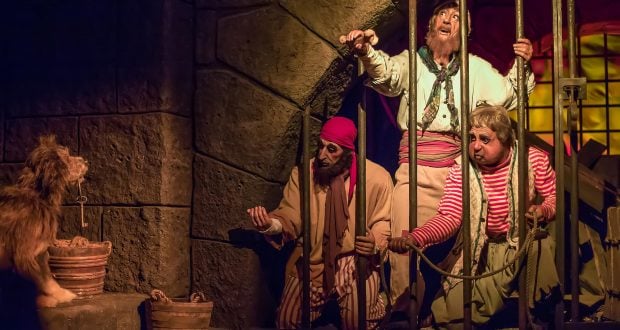 Intoxicating scents might not be the first thing (or second, or third…) that a Guest thinks of when remembering a Walt Disney World vacation. But since our sense of smell is the sense most strongly associated with memory, it stands to reason that smell plays a pretty important role in bringing to mind your most treasured Walt Disney World memories.

And indeed, Walt did not ignore our olfactory senses when designing the Parks – whether Guests realize it or not, smell is one of the puzzle pieces that helps to create the magic we love throughout Disney World. Here are some of the most iconic scents on WDW property that have the power to instantly transport us to Orlando!

Water in Pirates of the Caribbean

I’m going to go out on a limb and assume that if you’re reading this, you’ve probably been on Pirates of the Caribbean in Disney’s Magic Kingdom (if not, you really should). So when I talk about the unique and oddly mesmerizing smell of the water on this classic attraction, you’ll know what I mean.

Disney uses a chemical called bromine in the water on this attraction, and that’s what gives the water its trademark smell that’s a combination of fog, mildew, ozone, and chlorine. There’s nothing like it, and smelling this dirty, stagnant water scent will instantly make you feel like you’re riding Pirates again.

There are several scents that Disney uses in its Resort Hotel lobbies to set the tone for Guests. The smells are pleasantly subtle, but they’re there – just enough to make you think, “Oh, it smells good at this Resort; I wonder what that scent is…”.

For example, the lobbies in Disney’s Beach Club Resort, Yacht Club Resort, and Grand Floridian Resort & Spa all use the same scent: green aloe and clover (if you visit Grand Floridian during the holidays, the scent of the giant gingerbread house in the lobby may overpower this, though!). Disney’s Polynesian Resort lobby boasts a more tropical aroma, while Disney’s Wilderness Lodge smells appropriately like an evergreen forest.

Walking down Main Street, U.S.A. is a magical experience for a lot of reasons. It is always our first destination on a trip to Walt Disney World, because the glimpse of Cinderella Castle at the end of the street is such an emotional one! But even here, scents are at play, enhancing a Guest’s experience inside the Magic Kingdom.

You don’t even need to set foot inside Main Street Confectionary to be able to smell the tantalizing scents emanating from within. The smell is so pervasive that Disney World’s website even invites you to “follow your nose” inside!

So what exactly is this irresistible aroma? It’s a heavenly combination of all things sweet: lollipops, with a touch of vanilla and a whiff of fruit, and just a dash of cotton candy.

Just to be clear: we’re not advocates of book burning. But the smell of the Library of Alexandria burning as part of the fall of Rome is one of the most iconic scents on Spaceship Earth, or on any Walt Disney World attraction, for that matter.

Akin to the scent of a campfire, the burning smell inside Spaceship Earth is oddly comforting. We’re not sure of the exact science behind the smellitizer machines on Disney rides, but we’re sure grateful for them.

Sadly, gone are the days when a Guest could load up on those little shampoo or conditioner sample bottles, to be replaced the next day by Cast Members. Now, most Disney Resorts have switched to large, permanently installed shampoo, body wash, and conditioner containers. But the magical smell of the H2O remains as invigorating as ever (and luckily, you can buy products in this line to take home).

Ahhh, Karamell-Kuche – the derailer of all of my best healthy eating intentions. This shop in EPCOT’s Germany Pavilion is one of the most popular places in all of Walt Disney World to grab a delectable caramel-themed dessert or snack, and the glorious sweet aroma that wafts through the shop and beyond is truly intoxicating.

It’s the smell of caramel popcorn, caramel bars, caramel candies – all things sweet and caramel-y. I bet you know exactly what I’m talking about (and can smell it now!). And if not, it will only take one visit to make you a believer in the power of scent!

If you need more proof of the power of smell, you only need to look at all the companies that have, in recent years, made a business of recreating the most iconic scents pervading Walt Disney World. It’s now easier than ever to bring home your favorite Disney smells, so you can feel like you’re on vacation every day! Of course, nothing will ever replace the magic of smelling these intoxicating scents in Walt Disney World itself.