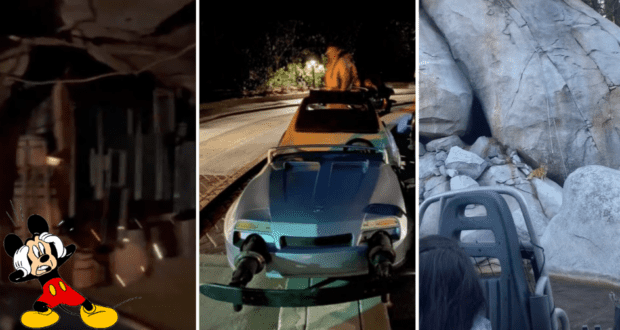 This weekend, Disneyland Resort was the unfortunate star of the show when it comes to mishaps, with three reported incidents circulating on social media. Let’s take a look at what happened on some of their most popular attractions.

We made it on… and, uhm… this just happened. pic.twitter.com/hKkXhYHdEa

Twitter account @TangaroaJoel reported a ride breakdown on Indiana Jones Adventure, located in Adventureland at Disneyland Park. As the rugged transport vehicle traveled through the ride’s tunnels, the car seemed to blow a fuse.

A flash was suddenly seen near the front of the truck, followed by an alarming spark! The voice heard on the vehicle’s speaker suddenly shut off, and the ride came to a stop. Over in Disney California Adventure, another ride experienced a mishap.

Popular white water rafting adventure, Grizzly River Run is an epic journey through a raging current that notoriously leaves Guests soaking wet. In a TikTok video posted by @milktea.1121, we see the ride at a standstill.

Guests aboard the eight-person raft were treated to a rare glimpse while stopped on the attraction. The TikToker captured one of Disneyland’s infamous cats sitting on a rock nearby.

Cats often remain out of sight at Disneyland Park, becoming their own form of Hidden Mickey. Guests are always thrilled to spot one of the felines meandering around. The animals serve an odd but necessary purpose at the Resort, keeping its rodent population under control. The last incident reported is perhaps the most shocking. Every Disneyland Guest’s worst fear became a reality on Autopia at Disneyland Park. In an unprecedented event, one of the cars actually hopped over its center divider!

The divider guides the cars and keeps them on track during their trip down the motorway. An Instagram photo posted by @matterhorn_matt9 shows the frightening scene, with the iconic car derailed.

It’s unclear whether there has been an increase in ride malfunctions lately or if there are just more people capturing the occurrences with their devices. Whatever the case, we’re glad no one was injured during these more minor malfunctions!