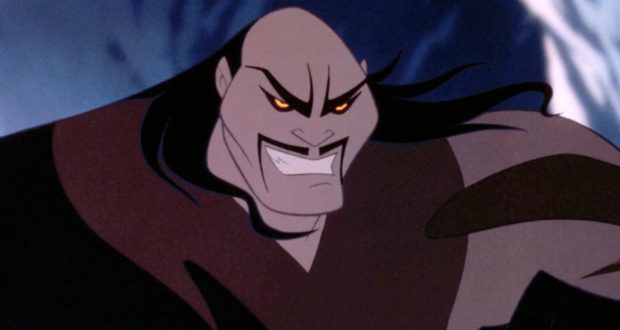 Over the years, Disney has produced scores of films that include some less than angelic characters. Some are cleverly manipulative. Some are eerily creepy. And some are just downright scary! According to disney.fandom.com, Disney has brought close to 130 different villains to scary life. (That’s a whole lot of fear factor!) Many of them could easily be listed under the heading of “most frightening characters,” but bonus points go to these eight characters whose very natures make us almost want to look away during their respective films. Which of these characters do you think is the most frightening?

Not too many things are more ghastly than a kidnapper, unless of course it’s a kidnapper who then proceeds to feign motherhood for 18 years, all in an effort to keep herself looking youthful. Mother Gothel may be one of the more beautiful of the Disney villains (maybe), but her very essence is horrid. Not only was she brazen enough to steal the princess from the King’s castle, but she raises Rapunzel to believe that Gothel is actually her mother. And then she spends every waking moment persuading Rapunzel to stay in the tower and never leave. After all, “the outside world is a dangerous place, filled with horrible selfish people.” Mother Gothel not only kidnapped Rapunzel; she controlled every facet of her life by denying her the freedom of leaving her home. Creepy!

Even if you’ve never watched all or part of Fantasia or Fantasia 2000, chances are you’ve seen this frightful Disney character at one time or another. His demonic features make him one of the most horrifying of the Disney characters. He is based on the God of the Night found in Slavic mythology. His glowing eyes seem to call out—without making a sound. He is one of the Disney villains for which we’ve never heard a backstory, and he doesn’t even really have a personality to speak of. The way he initially unwraps his massive wings to reveal his face in Fantasia is creepy, to say the very least, and spirits of unsavory character seem to obey his every whim. Chernabog is literally the picture of evil, drawn in demon form. Even Walt Disney was quoted as comparing Chernabog to the devil himself.

The way in which Lady Tremaine treats Cinderella after her father’s untimely death begs the question: was she planning this all along? (And did she have something to do with her late husband’s passing?) Regardless, Lady Tremaine is quite likely the Disney villain who initially gave stepmothers a bad name. Not only did she squander her late husband’s fortune on her own daughters, leaving Cinderella completely out of the receiving line; she also forced her to become a slave, a servant in her own home. But it doesn’t stop there; she goes on to allow her daughters to attack Cinderella and destroy her dress for the ball, doing nothing to stop their acts of rage. And when she discovers that Cinderella threatens to take her own daughters’ chance of marrying the prince, she locks her away in her tower bedroom and later trips the Grand Duke intentionally so he will drop the glass slipper and have no way of trying on Cinderella’s foot. Hey, anyone whose sidekick happens to be an animal referred to as “Lucifer” has me wanting to run the other way.

Since the Evil Queen appears in Walt Disney’s very first feature-length animated film (the first one ever for anyone), surely we can think of other villains that seem more frightfully evil than her. However, her very look as the old hag ranks her at the top of the list. And don’t forget she commanded the huntsman to not only murder Snow White in cold blood, but the then retrieve her heart, put it in an ornamental box and bring it back as proof that he had completed his assignment. As the old hag, the Evil Queen tricks Snow White by faking a heart attack and manipulating her into bringing her into the cottage where the Queen then poisons Snow White with a demonic apple. Yikes.

The first time I saw Turbo’s face once it’s revealed that King Candy is Turbo, I knew I’d keep him high on the list of scary Disney villains. Shapeshifting is horrifying, as is the idea of a kind old king who loves candy and rules an entire kingdom based on candy fooling unsuspecting victims into thinking he’s so overly kind and caring. He was single-handedly responsible for Vanellope’s glitching, and he goes on to try to destroy her once and for all in the Random Roster Race. Thank goodness Ralph accidently let in that Cy-Bug!

Animator Marc Davis outdid himself when he created Maleficent. Her very name means “doing evil, harming others, being harmfully malicious.” The name has always seemed to me like a cross of the words “malevolent” and “malicious,” each adjective sounding completely sinister. But Maleficent is arguably the most beautiful of the Disney villains (just look at her jawline and beautiful eyes). However, that beauty doesn’t translate into any random acts of kindness. Rather, she makes a lifestyle out of targeting others and destroying them. And then there’s that business of shapeshifting into a solid black fire-breathing dragon!

Aside from this villain’s hideous facial hair and wildly disproportionate body, Jafar earns a place on this list for being the sultan’s most trusted advisor and turning on him so completely. And then there’s the fact that he loves to use mind control. And again with the shapeshifting! Cobras are evil. Enough said.

Had it not been for this Chinese warlord, Mulan would never have had any cause for impersonating a male and going off to serve in the Chinese military in place of her father, so on that count, perhaps we have to thank Shan Yu for showing up so we’d have the story of Mulan. But there are so many things that make Shan Yu terrifying, they supersede any gratitude we may feel to him for his role. Let’s start with his viper-like eyes. They’re a terrifying yellow, and if it’s true that the eyes are the window to the soul, it’s probably safe to say that Shan Yu doesn’t have one. Then there are his teeth, which at first give the impression that he either had a really good orthodontist or that he was just blessed with perfectly straight teeth. But then the fangs on the bottom row of his teeth make him even scarier. His sheer size, added to the fact that he behaves completely ruthlessly and without regard for human life make him one of the more horrifying Disney villains.