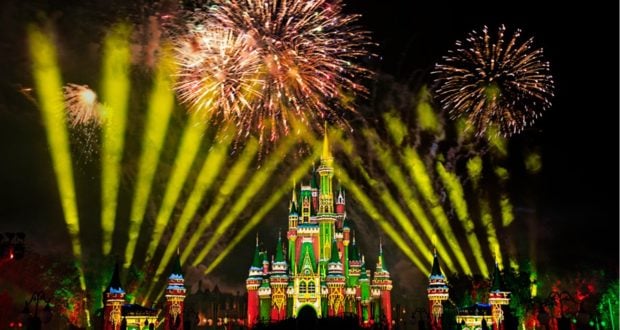 It’s the most wonderful time of the year! Even though it may seem like the Walt Disney World Resort holidays are far off, Disney is already making plans for the winter with their new special-ticketed event, “Disney Very Merriest After Hours”. This new ticketed event at Magic Kingdom Park will take the place of the former Mickey’s Very Merry Christmas Party. Ticket sales launched last week for the after-hours event “Disney Very Merriest After Hours“, but to our surprise, not a single party date is sold out yet which is different from years past.

Just like the replacement of Mickey’s Verry Merry Christmas Party, Mickey’s Not-So-Scary Halloween Party at Magic Kingdom Park was replaced by “Disney After Hours Boo Bash“. When the tickets became available there was a scramble to get them and Guests we struggling to get through on the phones. Currently, there is only one party date that remains available for Boo Bash. Unfortunately, Boo Bash reviews have been mixed. With Guests paying a lot more for this year’s special-ticketed event than years prior, we’re seeing a not-so-thrilled response from Disney fans.

Shifting gears to talk about the Disney Christmas party… how will this new party be different from the not-so-fantastic Disney After Hours Boo Bash? Unlike the Boo Bash, “Disney Very Merriest After Hours” will include the return of special holiday-themed fireworks for the party, as well as the return of a holiday parade! Even with the return of a parade and fireworks, it seems like Disney Park Guests aren’t scrambling to get their party tickets as we saw for Boo Bash.

So, what’s the holdup? Event ticket prices for Disney Very Merriest After Hours at Magic Kingdom Park range from $169 to $249 depending on the date you plan to attend the party. In 2019, Mickey’s Very Merry Christmas Party tickets started at $94. The huge price increase this year has us all a little unsure if it’s really worth it… especially after the unimpressive Disney After Hours Boo Bash.

As shared by Disney: “Disney Very Merriest After Hours: Celebrate the holidays in the very merriest way at a new event featuring a themed parade, fireworks, Disney Character sightings, and more! Disney Very Merriest After Hours will take place from 9:00 p.m. to 1:00 a.m. on select nights, from November 8 through December 21, 2021. Ticket holders will be admitted to Magic Kingdom Park as early as 7:00 p.m. on the valid date of their ticket, giving them even more time to enjoy Park favorites before the event begins—including the new Disney Enchantment nighttime spectacular! These dated tickets do not require an additional day theme Park ticket or Disney Park Pass theme Park reservation.” Plus, Disney noted there will be complimentary snacks as well as specialty-paid holiday treats.

Keep in mind, if you’re visiting Magic Kingdom Park this holiday season, you’ll need to purchase a “Disney Very Merriest After Hours” ticket to see the special Christmas fireworks and holiday parade with Disney characters. “Disney Very Merriest After Hours” will include the nighttime spectacular Minnie’s Wonderful Christmastime Fireworks and the special holiday-themed parade Mickey’s Once Upon a Christmastime Parade which will include the favorite toy soldier march and end with the holly, jolly Santa Claus! These experiences are only available for party-goers and will not be available in the Park during the normal operating day.

The new Christmas party tickets are on sale here with a $10 discount if you are a Disney Vacation Club Member and Annual Passholder. Will you be purchasing “Disney Very Merriest After Hours” tickets? Is the price worth it for the 4-hour special event at Magic Kingdom? Regardless of if you’re a party-goer or not, we’ll go ahead and get in the spirit by wishing you a Merry Christmas and Happy Holidays, Disney fans!