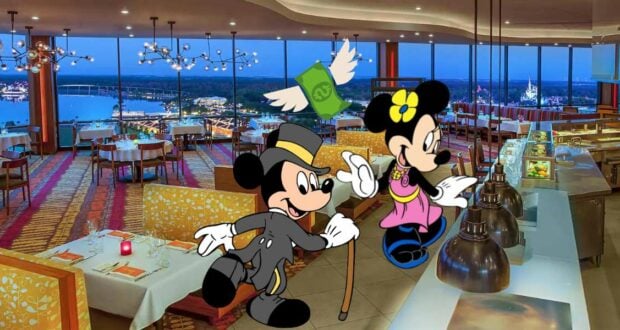 The Walt Disney World Resort is set to debut several new dining experiences this year, and one reinvented dinner service will be coming soon outside of Magic Kingdom Park.

Prix fixe and multi-course dining has been all the rage at Disney World signature restaurants in recent years, offering Guests the opportunity to try one appetizer, one entree, and one dessert per person for a set price. Whether on the more “reasonably priced” end (at least by Disney standards) like Be Our Guest Restaurant in the Magic Kingdom, or the ultimate deep dive into a gourmet dinner like Victoria & Albert’s at Disney’s Grand Floridian Resort or Takumi-Tei in EPCOT, there are several restaurants that offer this style of dining. For years, one of the most popular signature dining experiences at Walt Disney World has been California Grill, located on the 15th floor of Disney’s Contemporary Resort. Open for dinner only (though occasionally for brunch in years past) California Grill offers top-notch dinner and service with expansive views of the Magic Kingdom. And as you can probably imagine, one of the most popular times to dine here is during the Park’s nighttime fireworks spectaculars for views both from the dining area and the nearby balcony.

Since October 1, 2021, California Grill has been serving up a prix fixe menu inspired by the Walt Disney World Resort’s 50th anniversary. While the offerings have been met with largely positive reactions from Guests who had dined there recently, some fans had been hoping for the return of the restaurant’s old menu. A new menu is coming soon (when the 50th celebrations officially come to an end on March 31, 2023), and like its predecessor, it will also offer a prix fixe dining experience. The updated menu will also continue the same pricing that operated on the 50th-anniversary menu of $89 for adults and $39 for children for one appetizer, entree, and dessert per person.

At this time, Disney has not confirmed whether or not brunch will return to California Grill at a later date, or if select menu items introduced for the Resort’s 50th anniversary (like this $137 cocktail!) will remain available.

Remember that as a signature restaurant located outside of the theme parks, California Grill does have a dress code. Reservations are also required and may be made in advance on Disney’s official website or through the My Disney Experience app. RELATED: This Is the Most Underrated Restaurant at Disney Resorts

Will you be dining at the top during your next Disney vacation? Be sure to try for a reservation during the fireworks, and enjoy!