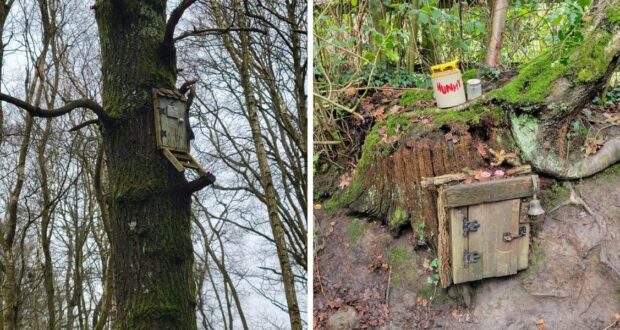 “When you see someone putting on his Big Boots, you can be pretty sure that an Adventure is going to happen.”

And “Big Boots” you’ll need if you want to take a muddy adventure down to the real Hundred Acre Wood!

Yes, you can follow Piglet, Tigger, and Rabbit’s footsteps in the beautiful forest that was the inspiration for A.A. Milne’s popular Winnie the Pooh stories. Disney Tips visited Ashdown Forest over in the United Kingdom and has compiled a complete guide for Pooh fans everywhere! 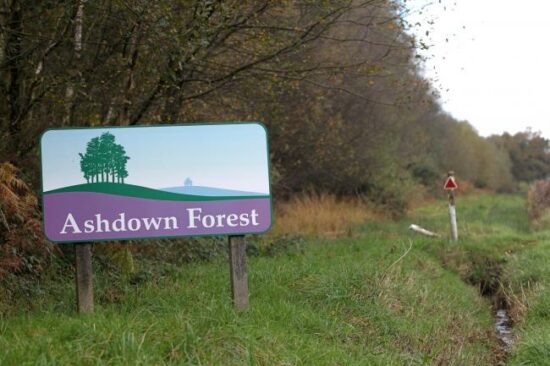 Created by British author A.A. Milne in the 1920s, Winnie the Pooh has become a beloved character over generations. The first collection of stories about the popular bear was the book Winnie-the-Pooh (1926), and this was followed by The House at Pooh Corner (1928).  All volumes were illustrated by E. H. Shepard.

In 1961, Walt Disney licensed select film rights of Milne’s Winnie the Pooh stories from the estate of A. A. Milne and adapted the Pooh stories into a series of features that would eventually become one of its most successful franchises, earning the studio more than $80 billion. These cherished characters have recently joined the public domain and Disney no longer holds the copyright to the stuffed animals.

Milne based the characters on his son, Christopher Robin, his stuffed animals — Winnie the Pooh and friends Piglet, Eeyore, Kanga, Owl, Roo, and Tigger—and their country home in England’s Ashdown Forest.

Originally a deer hunting forest in Norman times, Ashdown Forest is now one of the largest free public access spaces in the South East of England. The countryside beauty spot is known the world over as the “home” of Winnie the Pooh, and features many recognizable inspiration spots where A.A. Milne observed the adventures of his son, Christopher Robin. 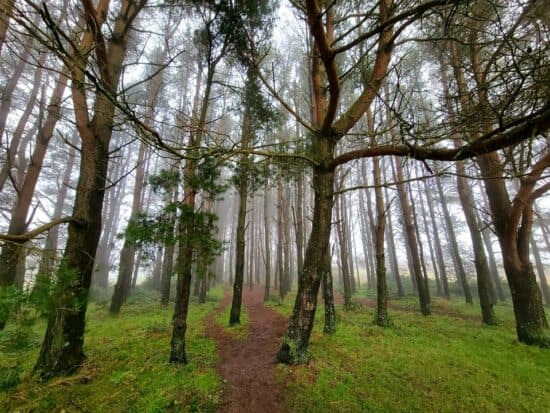 Christopher Robin said in his autobiography that Ashdown Forest was “identical” to Pooh’s forest from his father’s books, and once we arrived, we could see why.

From the very first glimpse of the enchanting woodland, we could pick out the distinctive landscapes that make up the illustrations in the famous books.

In 1925, A.A. Milne, moved from London to a country home just north of Ashdown Forest at Cotchfield Farm, near Hartfield. Christopher Robin wrote in his book:

“The four of us would pile into a large blue, chauffeur-driven Fiat and travel down every Saturday morning and back again every Monday afternoon. And we would spend a whole glorious month there in the spring and two months in the summer.” 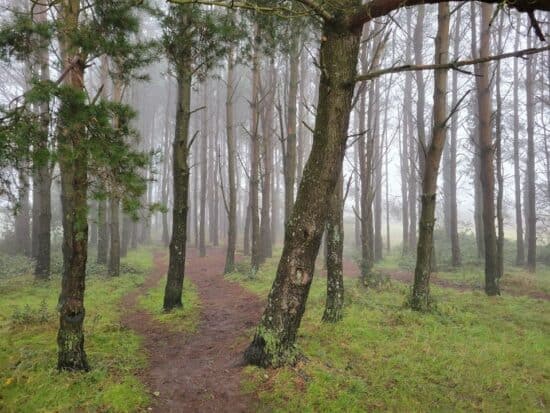 We spent two days in Hartfield, at the quaint 15th Century pub The Anchor Inn. Each of its four rooms is named after a Winnie the Pooh character, with original wooden beams, crooked ceilings, and Pooh wallpaper adding to the charm. 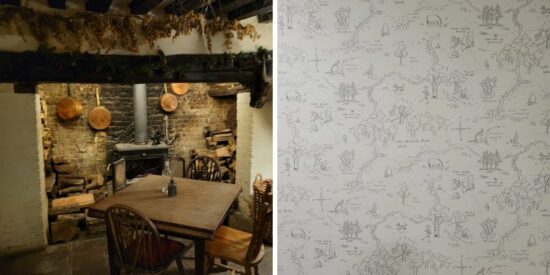 Our first adventure in our “Big Boots” (it was VERY muddy this time of year) was to the original Poohsticks Bridge, a footbridge across the River Medway in Posingford Wood.

A 3 mile hike through the fields and woodland of the Ashdown Forest led us to the little wooden footbridge. The bridge is well signposted along the route, but if you want to play a game of Poohsticks we recommend collecting sticks along your walk. There are not many at the bridge itself, and it is frowned upon to pull branches from trees. 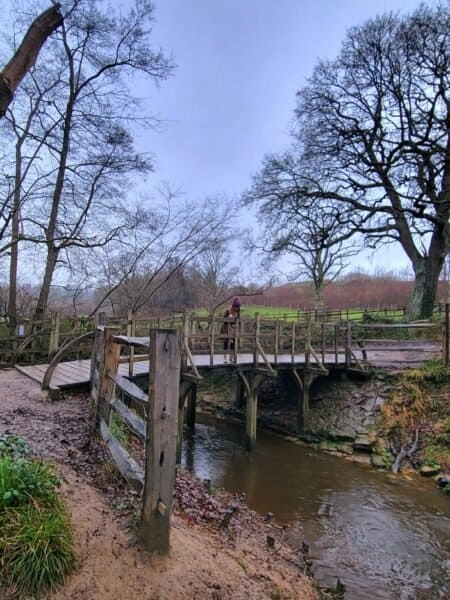 There is a small parking lot called Pooh Car Park located about a 20 to 30 minutes walk from the bridge itself, if you don’t fancy the long loop walk around the forest from Hartfield after a competitive game of Poohsticks!

If you keep your eyes peeled, there are also some surprises in the woodland surrounding the bridge for Winnie the Pooh fans. We missed them initially, but keen adventurers will be rewarded with the lovely discoveries of Winnie the Pooh and Owl’s homes in the forest!

Winnie the Pooh’s house, with Sanders sign and honeypots, can be found about 250 steps from the bridge toward the farm. You’ll need to look up for Owl’s house, located halfway back to the parking lot in a tree on the left as you return. 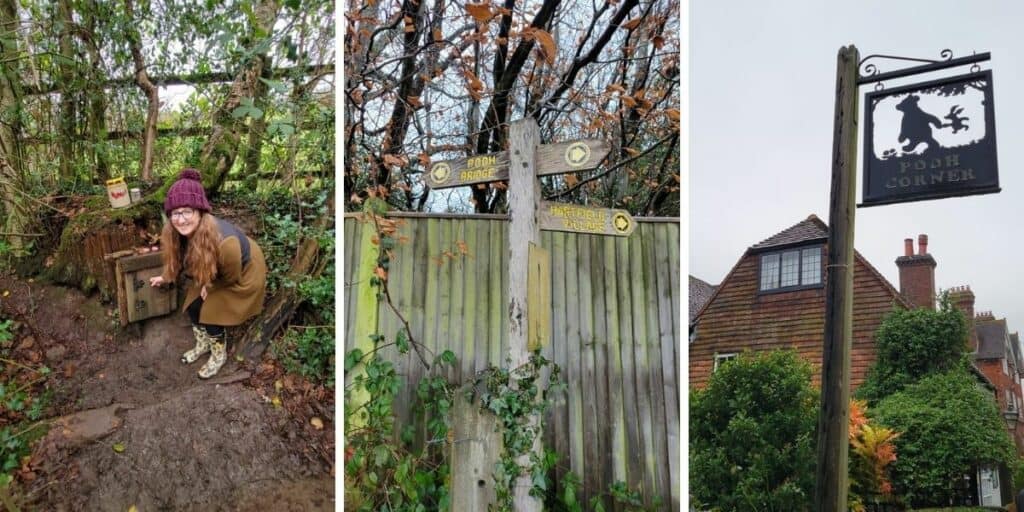 Our next adventure was to Gill’s Lap, about 5 minutes south of the Pooh Car Park. A small clump of trees just north of Gill’s Lap became Christopher Robin’s “Enchanted Place” because no one had ever been able to count whether there were 63 or 64 trees in the circle.

The looped walk from Gill’s Lap parking lot is only about 0.6 miles, but includes spots like Eeyore’s house, Roo’s Sandy Pit, and The Heffalump Trap, all enveloped by the British trees and quiet beauty. 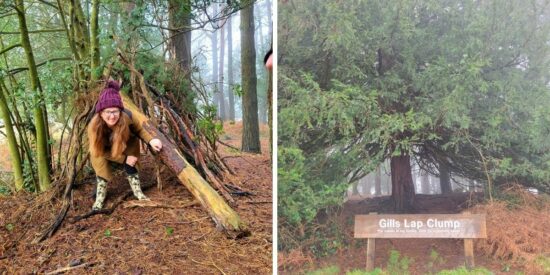 Fans of Winnie the Pooh can also try some delicious treats and food at Pooh Corner, a cute little tea room and gift shop situated in Hartfield just down from the Anchor Inn. 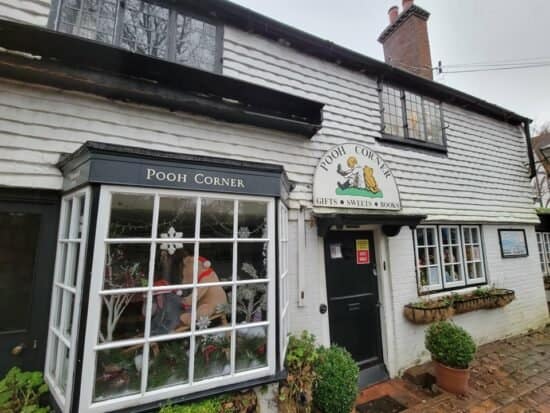 Our favorite bear turned 95 years old last October, and Disney ensured that they celebrated the big milestone without letting any Woozles or Heffalumps interfere. Guests can enjoy The Many Adventures of Winnie the Pooh attraction at Walt Disney World Resort in Florida and Disneyland Resort in Anaheim, California, as well as the new Broadway musical created about the characters.

You have to look quickly to find these Disney “Easter eggs,” but just as you enter Owl’s house in the Winnie the Pooh ride, look to your left, and you will see a picture of Mr. Toad (from the previous attraction) handing over the deed to the building in Fantasyland.

Hopefully you don’t encounter Heffalumps or Woozles on your visit to Ashdown Forest!