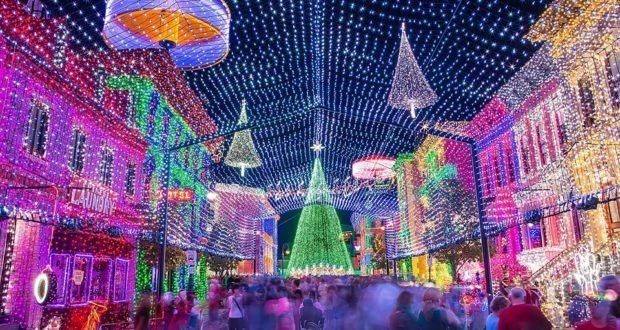 For over 20 years, Guests celebrated the holiday season at Disney’s Hollywood Studios with a magical, musical light extravaganza: The Osborne Family Spectacle of Dancing Lights. The Osborne Lights brought a huge section of the Park merrily to life and captivated Disney Guests with its mesmerizing, multi-colored lights that “danced” to a myriad of holiday tunes.

The beloved light display has been dearly missed by anyone lucky enough to experience it. But how did the lights come to be at Walt Disney World in the first place, what happened to them, and will they ever return? Today, we take a fond look back at The Osborne Family Spectacle of Dancing Lights.

It all started with a little girl’s wish. In 1986, Allison Osborne of Little Rock, Arkansas, had a special Christmas wish: a home bedecked with Christmas lights. Her parents did not take her wish lightly, initially putting up 1,000 lights and eventually buying their neighbors’ houses to add even more lights, until the display boasted more than 3 million lights by 1993.

Soon, the Osborne Christmas lights had become famous (pilots could even reportedly see the lights when they flew over the area) and the focus of many a news story. But not everyone was a fan.

The Osbornes’ neighbors weren’t pleased with the glaring lights on the street, nor the fact that hours would be added to a simple trip to the store, thanks to the heavy crowds attracted by the lights. A lawsuit was filed to limit the light display, and despite an appeal, the Osbornes lost the court case and had to face the sad truth: the lights had to go.

This is where Disney enters the picture! Like everyone else, Disney had heard of the famous Christmas lights, and in 1995 offered to display them in Hollywood Studios – back then called MGM Studios – during the holidays. The Osborne family was delighted. After all, who wouldn’t want their family Christmas display to be used in a Walt Disney World Theme Park?

The new home for the Osborne Lights was perfect. WDW is isolated from residential neighborhoods in Orlando, so there were no worries about complaints from neighbors. Plus, Disney had the resources to keep the display running year after year and implement some improvements!

Among the additions Disney made to the light spectacle were Hidden Mickeys, other Disney-themed decorations, fake snow, and even more lights. Suppose you remember walking down the Streets of America with lights merrily dancing around you and snow falling gently on your upturned face. In that case, you understand the magic of this winter wonderland!

More than 30 snow machines were used each night, and once the lights were switched to LED lights, the canopy cycled between millions of different colors. All told that the more than five million lights used strings that stretched more than 10 miles!

Guests would be hard-pressed to pick their favorite part of the Osborne Family Spectacle of Lights. Maybe the massive illuminated globe, or perhaps the gigantic 70-foot Christmas tree, or the train helmed by none other than Mickey Mouse? A stroll through the Osborne Lights was always a highlight of a WDW vacation during the holidays.

Do You Hear What I Hear

But Disney wasn’t done yet. Imagineers knew that music is a magical part of the holidays, so they figured out how to incorporate Christmas music into the Osborne Light display. They used 1,500 dimmer switches and choreographed the lights to “dance” to the beat of various beloved Christmas songs.

So now, Guests could sing and dance right along with the merrily blazing lights each time they “performed,” and the lights would return to normal in between choreographed shows.

The End of an Era

So, what happened to this beloved holiday fixture at WDW? As any recent Guest to Disney’s Hollywood Studios knows, there have been a lot of changes in that Park in the past few years – namely, the addition of Toy Story Land and Star Wars: Galaxy’s Edge.

The fate of the Osborne Lights was tied to the birth of these new lands because the areas that hosted the display (Streets of America and the former Backlot Tour area) needed to be razed to create them. So the next time you’re walking through Black Spire Outpost or zipping along on Slinky Dog Dash, you can think of the years of holiday magic that occurred on those spots, thanks to the Osborne Family Spectacle of Dancing Lights.

Though they’ve been absent from Hollywood Studios since January of 2016, the Osborne Family Spectacle of Dancing Lights still holds a special place in the hearts of Disney Guests. Sadly, wishing that Disney will bring back the display remains futile – not only is there no place for them now in the Park, but Disney donated most of the lights to Give Kids the World Village.

And here’s where the story gets magical again! Give Kids the World Village provides special fairy tale vacations to critically ill kids and their families, who hail from all over the globe. The huge not-for-profit resort in Kissimmee, Florida, also hosts a holiday lights spectacular from November to January that’s open to the public and – you guessed it – features the former Osborne Lights, now repurposed to create a new, whimsical, dazzling holiday display for all.