It’s a sign of the times that some of our beloved shows, attractions, and interactions are coming back to Disney Parks. And Disney just dropped another major update today that made us roar.

Disney’s ‘Tale of the Lion King’ show, premiered at Disneyland back in 2019 and was a huge hit. The show only ran from summer through September (shockingly wasn’t ended by the pandemic) and has not yet had an opportunity to return, until now! 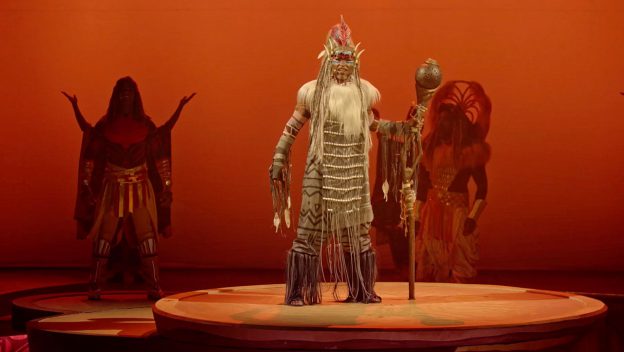 “Beginning May 28, 2022, Disneyland park will welcome “Tale of the Lion King” to its new home at the Fantasyland Theatre where this original, story-theatre adaptation of Disney’s “The Lion King” will be staged in an all-new presentation (as depicted in this artist rendering). At the heart of the production is a traveling troupe known as The Storytellers of the Pride Lands who weave the tale of how a cub becomes a king through dialogue, song, dance and percussion. From the scenic and costume designs to the new original musical arrangements and choreography, every aspect of “Tale of the Lion King” honors and is inspired by the cultural roots of this timeless story.”

if you’re a lover of The Lion King and of Disneyland, you’ll definitely be excited May 28, 2022 when this show officially comes back, and will probably be first in line to see it as Disneyland Resort tends to lack Lion King elements. This show will give Park Guests a taste of the hit Broadway production version of The Lion King through song, dance, and music.

This show was originally meant to re-open in the spring, which was then announced it would be summer, and it seems Disney finally picked a date and settled for one right in the middle! This show is bound to be a hit opening on Memorial Day weekend, AND coinciding with the relaunch of ‘Fantasmic!’. It’s going to be a busy weekend that’s for sure. Do you have your Park reservation?

2022-05-09
Laurelle McVicker
Previous: Disney Drops First Trailer for Avatar: The Way of Water
Next: Disney Drinks You Can Order at Starbucks