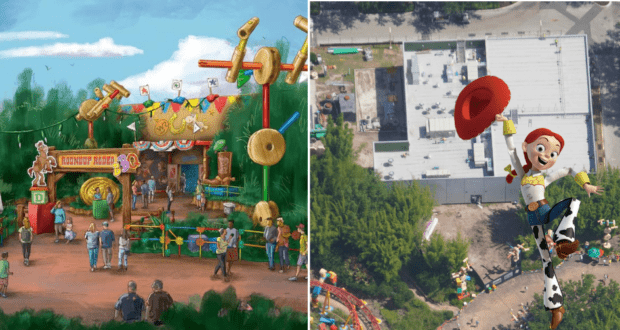 Construction has been underway for a couple of years now for the newest table service restaurant to open in Disney’s Hollywood Studios, and new aerial photography seems to indicate that work on the space is moving right along. Roundup Rodeo BBQ Restaurant was first announced by Walt Disney World in 2019, with a forecasted 2020 opening at the time. Of course, like many construction projects during 2020, this timeline was pushed back during the pandemic, and we are just now seeing what looks like much of the building nearing completion.

The latest overhead shots of the Toy Story Land restaurant by @bioreconstruct seem to indicate that much of the restaurant is complete and that the final exterior touches on the building in Guest-facing areas may be the last updates needed.

Previously Disney filed a permit for exterior work on the building, which is indicative of light fixtures and other touches on the outside of the building. The permit was filed back in April and Disney has not yet confirmed an opening timeframe, but it appears to be getting close.

Roundup Rodeo BBQ will combine the elements already found in Andy’s Backyard with a restaurant styled after cardboard boxes built by Andy as a place for his toys to dine. Inside the restaurant, Guests will see the western town and train station playset pieces along with favorite characters from the Toy Story franchise including Jessie, Bo Peep, and Trixie. The new location will be the second restaurant to open in Toy Story Land, along with Woody’s Lunch Box which opened with the land back in 2018.

Menu details (aside from the BBQ style of cuisine) have not been shared yet, and we will be back with additional construction updates and hopefully confirmation of an opening date as soon as we learn more here on Disney Tips.