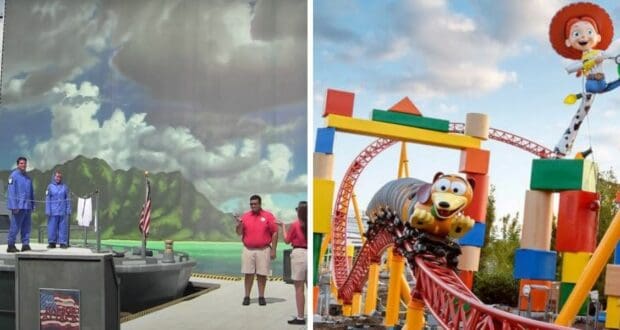 It’s been more than 30 years since Disney’s Hollywood Studios first opened its doors – and a lot has changed since then, including its name!

While Disney’s EPCOT theme park is currently the Park in which the most exciting changes are happening (Guardians of the Galaxy: Cosmic Rewind, anyone?), Disney’s Hollywood Studios has had its own share of exciting changes over the past few years, with the opening of Toy Story Land and Star Wars: Galaxy’s Edge.

Aside from the iconic Chinese Theater, the current version of the park is almost unrecognizable compared to the version that opened in 1989. Today, we’ll look at Disney’s now extinct Studio Backlot Tour, which paved the way for Toy Story Land at Hollywood Studios.

From Film Studio to Theme Park

Guests visiting Walt Disney World’s Hollywood Studios today may not realize that it was once a working television, film and animation studio, in addition to being a theme park.

Back then, it wasn’t even called Hollywood Studios: the Park opened in 1989 as Disney-MGM Studios Park, with the beloved Earffel Tower as its icon (later replaced by the Sorcerer’s Hat, which was itself removed in 2015).

On opening day, there were only two actual attractions operational within the Park: the Great Movie Ride on Hollywood Boulevard, recently replaced with Mickey & Minnie’s Runaway Railroad, and the Studio Backlot Tour.

Since then, Disney has been phasing out the TV and film production elements of the Park (like Lights, Motors, Action! Extreme Stunt Show, the American Idol Experience, and Streets of America) in favor of the current focus on Pixar and LucasFilm productions, and to pave the way for newer areas, such as Star Wars: Galaxy’s Edge.

The only remaining opening day attraction in Disney’s Hollywood Studios, the Studio Backlot Tour opened on May 1, 1989. Originally, it was part walking tour and part tram ride, and it was considerably longer than any attraction on Walt Disney World property nowadays, at two hours in length.  It also embodied the TV and film production theme of the Park perfectly!

Guests would get a glimpse of scenic and costume departments, and then be treated to the exterior street shots on Residential Street used by movies and TV shows of the day (including The Golden Girls), and New York Street – then not open to other Guests.

By the early 1990s, the walking tour portion of the Studio Backlot Tour had been separated from the tram tour, and renamed Backstage Pass. Even more changes were in the works, with two future Hollywood Studios lands on the docket.  Residential Street was demolished in 2003, and Streets of America closed in 2016 (along with the beloved Osborne Family Spectacle of Dancing Lights). What remained of the Backlot Tour finally closed on September 27, 2014, to make way for Toy Story Land.

There’s a Toy Story-themed land in Hong Kong Disneyland, Shanghai Disneyland, and Walt Disney Studios Park in France, but the largest version is Toy Story Land in Disney’s Hollywood Studios, at about 11 acres. It opened in 2018, and has been a hit ever since with kids and kids at heart.

In Toy Story Land, Guests “shrink” down to the size of a toy, which effectively means that everything around you is larger than life.

You might sit on giant Babybel Cheese seating to eat your lunch, pose with the huge and colorful popsicle stick wall, or pass through a display of enormous blocks and childhood toys to use the restroom. Woody, Buzz Lightyear, Jessie and all of your favorite characters from the Toy Story franchise are here, and the entire land is a whimsical riot of color and nostalgic fun.

There are three rides to experience in Toy Story Land at Disney’s Hollywood Studios. Toy Story Mania! is a shooting arcade themed like a carnival, Alien Swirling Saucers is a spinning ride akin to a gentler version of the teacups in Mad Tea Party at Disney’s Magic Kingdom, and Slinky Dog Dash is a family-friendly roller coaster where your ride vehicle is Slinky Dog.

Of these, Slinky Dog Dash is the ride you won’t want to miss – and if you can, ride it during the day and at night, because the views are completely different and completely fabulous from one to the other.

Toy Story Land is an excellent addition to a Park that was once considered a half-day park in Walt Disney World. Suffice it to say that between this land and Star Wars: Galaxy’s Edge, you’ll need more than half a day to do Disney’s Hollywood Studios justice!

We love experiencing new attractions and areas at Walt Disney World, but it’s always sad to say goodbye to a beloved old favorite.

At least we’ll always have our memories of extinct rides like Studio Backlot Tour while we enjoy thrilling new offerings like Toy Story Land.

2022-03-22
Stacy Milford
Previous: UPDATE Provided on Ukrainian Child That Sang “Let It Go” in a Bunker
Next: Here’s Your Chance to Win One of FIVE Disney Wish Cruises!