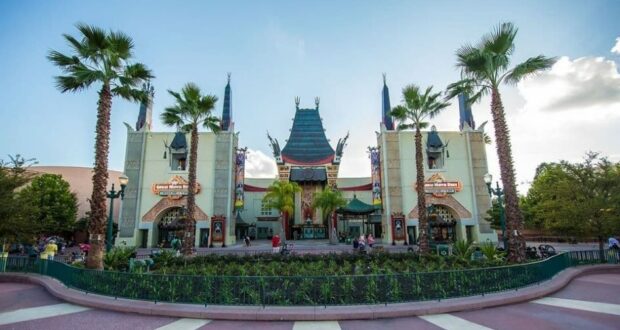 Of course, Disney has a lot to celebrate! Over its 50-year history, Guests have seen a great number of changes to the parks and beyond. New lands (most recently Star Wars: Galaxy’s Edge and Toy Story Land in Disney’s Hollywood Studios) have emerged, innovative restaurants like Space 220 in Disney’s EPCOT have opened, and even now, state-of-the-art attractions are being readied for Guests to enjoy including TRON Lightcycle Run at Disney’s Magic Kingdom and Guardians of the Galaxy – Cosmic Rewind at Disney’s EPCOT.

Today we look at the current attraction Mickey and Minnie’s Runaway Railway in the Chinese Theater at Disney’s Hollywood Studios, and the fan-favorite it replaced: The Great Movie Ride.

Anyone who has visited Disney’s Hollywood Studios will be familiar with The Chinese Theater on Hollywood Boulevard, originally designed to draw Guests into the Park (then known as Disney’s MGM Studios), much like Magic Kingdom’s Cinderella Castle, Disney’s Animal Kingdom Tree of Life and EPCOT’s Spaceship Earth.

The stunning building is a replica of Grauman’s Chinese Theater in Los Angeles, California, which still functions as a movie theater. Just like the original, Hollywood Studios’ version contains celebrity handprints, signatures, and footprints added from 1989 to 1995, and because this is Walt Disney World, Mickey Mouse and his pals even got in on the action, leaving their own special marks on the concrete on opening day. Disney wasn’t able to secure rights to “Grauman”, so the building is known simply as “The Chinese Theater”.

When Disney’s Hollywood Studios Park opened back in 1989, The Chinese Theater played host to The Great Movie Ride. This classic attraction was a 22-minute-long dark ride that took Guests on a journey through the history of cinema, fittingly for a theme park based on the magic of Hollywood.  You could board a tram, and visit some of the most unforgettable scenes from your favorite classic movies, complete with elaborate backdrops and dozens of Audio-animatronics.

Gene Kelly swung from a lamp post in his iconic number from Singing in the Rain (1952), and Julie Andrews and Dick Van Dyke delighted Guests by singing and tap dancing on London rooftops in an homage to Mary Poppins (1964).  Gangster movies and westerns were represented, as well as the Alien franchise. Classic horror film scenes brought Guests face-to-face with mummies, while Munchkins welcomed Guests to Oz.  And what would a movie ride be without a nod to Indiana Jones, in an ancient snake-filled (of course) temple?

Like many Walt Disney World rides, the queue for The Great Movie Ride was itself almost an attraction.  Here, you were treated to displays featuring actual props and costumes from famous movies over the years. Guest could see the script and one of Scarlet O’Hara’s dresses from Gone with the Wind (1939), the jacket worn by Eddie Murphy in Beverly Hills Cop II (1987), Casablanca’s piano from 1942, costumes worn by Starfleet officers in Star Trek: The Motion Picture (1979), and even one of the pairs of ruby slippers used in The Wizard of Oz (1939).

Over the years, the Audio-animatronics in The Great Movie Ride aged, and the attraction started to feel outdated. Disney wanted to shift the focus of Disney’s Hollywood Studios from show business to popular films, and the ride closed its doors forever in August 2017 to make way for Mickey and Minnie’s Runaway Railway.

The exterior of The Chinese Theater hasn’t changed much – Guests will still be able to enjoy the exquisite façade and the famous imprints in the concrete.  Inside, however, is another story!  In March 2020, Mickey and Minnie’s Runaway Railway welcomes its first Guests, becoming the first attraction at a Disney Park to feature Mickey Mouse and his pals Minnie Mouse, Donald Duck, Daisy Duck, Goofy, and Pluto.

The attraction is significantly shorter than its predecessor, at almost 5 minutes in length. It takes Guests inside an animated Mickey Mouse short, and specifically, the short film A Flower for Minnie (2015) was used for inspiration.

With Goofy as your engineer, you’ll travel by train through colorfully whimsical animated scenes, including a carnival, an underwater landscape, and a busy city. Don’t forget to keep your eyes peeled, because Mickey and Minnie’s Runaway Railway boasts more Hidden Mickeys than any other spot on Disney property! The queue features beautiful vintage-style poster art of Mickey Mouse cartoon shorts.

Guests pining for The Great Movie Ride, take heart! As is usually the case, a Disney attraction may be gone, but traces remain, worked into the ride that replaced it. Watch for a poster in the carnival scene that reads “The Great Moving Ride”, a mailbox reading “No Place Like Home” amid the tornado, which itself is a reference to Wizard of Oz (1939), and an angry cat sound in a trash can in the back alley as you leave the dance studio, which is the same sound used in the Great Movie Ride’s hijack scene!

It’s always sad to say goodbye to any restaurant, ride or show in Walt Disney World. Nostalgia plays a big role in the magic of Disney, and it can take some time to get used to the idea of a favorite attraction being demolished to make way for a brand-new offering. Luckily, Disney Imagineers have an excellent track record for designing amazing new attractions – and they know how to incorporate subtle elements of extinct attractions to make the loss a little less painful.