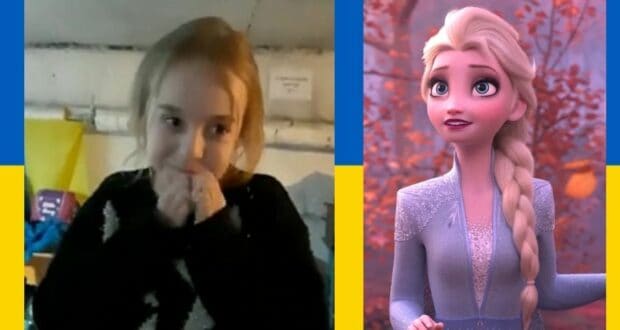 We previously shared the news about a young Ukrainian child that went viral for singing the popular Disney song, “Let It Go” from Frozen (2013). What made the video extra unique was that this little girl was singing it while in a Kyiv bomb shelter during the Russian invasion of Ukraine. Now, we’re seeing (and hearing!) an update of the young child.

It’s a difficult time to watch the news as the Russian invasion of Ukraine is ongoing with no end yet in sight. This sweet viral video was hard to watch but definitely a light in the midst of trouble. Here’s the first video in case you have missed it:

When a video of Amellia Anisovych surfaced, it wasn’t long before Frozen stars including Idina Menzel (voice of Queen Elsa) and Josh Gad (voice of Olaf), along with the former Disney CEO Bob Iger recognized the little girl, spreading her video across social media:

Now, Good Morning America is providing an update on the Ukrainian girl tweeting, “7-year-old Ukrainian refugee Amellia Anisovych, who gained worldwide attention for singing “Let it Go” while in hiding from Russian attacks, sang the Ukrainian national anthem Sunday night at a charity concert in Poland.”

Amellia wore a traditional Ukrainian dress with her hair in pigtails when she sang the anthem at the “Together for Ukraine” concert in Lodz, Poland with her beautiful voice.

Check out the video below with a clip of Amellia singing the Ukrainian national anthem:

The charity concert in Poland raised more than $380,000, according to The Associated Press. The young girl is now a refugee in Poland, along with her grandmother and brother. According to the AP, her parents remain in Kyiv.

Disney became the first movie studio to take action against Russia, as they released a statement that the company would be halting all theatrical releases in Russia “given the unprovoked invasion of Ukraine.” Since several companies and businesses have pulled out of Russia during this time of turmoil.

Beautiful singing Amellia! Our thoughts are with her family, and all the families of the Russian Ukraine War as the fighting continues around cities in Ukraine.