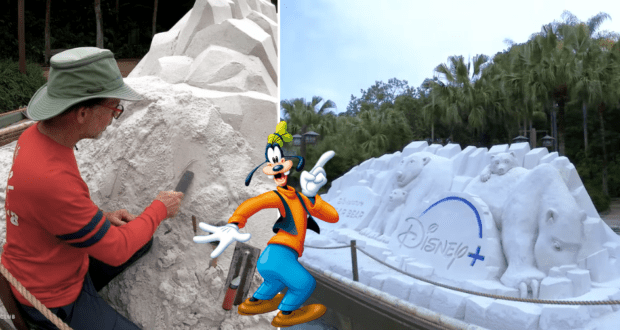 Ever wonder how those epic sand sculptures you sometimes see around Walt Disney World were created? These are no ordinary sandcastles, and it takes a lot of skills and precision to be able to create these massive works of art.

D23 shared a timelapse video, featuring the sculptor and owner behind Team Sandastic Mark Mason, to give us a glimpse at how these breathtaking works are made. Take a look at the creation of this Disney+ sand sculpture below:

Team Sandtastic has been responsible for the creation of a number of sand sculptures around Walt Disney World over the years, with some of the most recent ones aside from the Disneynature Polar Bear (2022) art above being for Ice Age: Adventures of Buck Wild (2021) as well as a number of new titles from National Geographic.

If there is a sand sculpture to be found at Walt Disney World, you can often find it outside Disney’s Animal Kingdom Park as seen in the video above. Other locations known to feature sand sculptures on occasion include Disney Springs, and sometimes even areas alongside topiaries at the EPCOT International Flower & Garden Festival. In addition to being Disney’s go-to sand sculptors, Mason and his team have traveled to locations around the world to share their incredible talents. Their sculptures have been used for all kinds of special events (both indoor and outdoor), commercials, conventions, and more.

When you visit Disney’s Animal Kingdom or just happen to stumble upon one of these breathtaking sculptures elsewhere at Walt Disney World, be sure to take a moment to take it all in. They really are filled with so many interesting details, and for folks who certainly could not create anything like this ourselves we are always impressed seeing the finished product. Looking for more works of art at Disney’s Animal Kingdom? You could argue that the park itself is a work of art, but we recommend checking out all of the theming on the Maharajah Jungle Trek in Asia that takes Guests through ruins filled with murals, or check out the shops in Africa as many of them stock authentic pieces of African art. You never know what kind of artwork you might see at Walt Disney World!