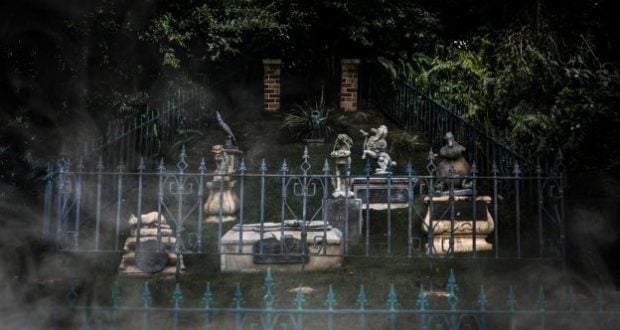 One of the most beloved attractions in all of Walt Disney World is the Haunted Mansion in the Magic Kingdom’s Liberty Square. Opening with the Park on October 1, 1971, the popular attraction has been scaring and delighting Guests with favorite characters, scenes, music, and effects ever since.

While every Guest is familiar with the Ghost Host, Constance the Bride, and the words to “Grim Grinning Ghosts” by the Sherman Brothers, many incredible details and historical anecdotes are found at the attraction that often goes overlooked. From tiny details that have been there since the beginning to add layers of depth and storytelling that have been added over time, there are countless details to stop and enjoy at the Haunted Mansion. 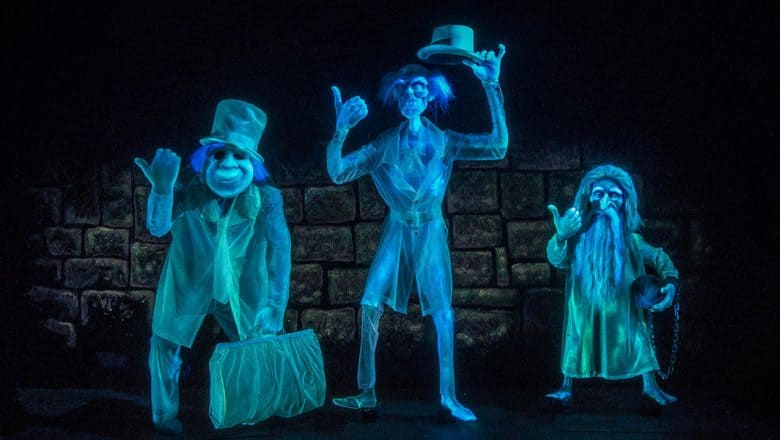 Murder Mystery – As Guests enter into the standby side of the Haunted Mansion’s queue, they move past the banks of the Rivers of America before heading into an interactive graveyard filled with eerie details and things to explore. One of the first interactive elements that Guests come across is a quintet of mounted busts depicting members of the Dread family who all met their ends in mysterious ways. Upon reading the plaque on each podium, Guests can soon figure out that there is a murder mystery game to be played to figure out how each family died or was murdered by another member. Guests who take the time to stop, read the information, and look for details on each of the busts can enjoy an in-depth story that many Guests walk right past.

Imagineering Tombstones – While progressing through the outdoor graveyard, Guests can check out dozens of tombstones that feature humorous and memorable epitaphs that share how each individual died. Some of the most memorable stone features are those of Master Gracey and Grandpa Mark. While they are recognizable to many, some Guests might not realize that the names correspond with Imagineers who contributed to the attraction. Master Gracey is Yale Gracey, who conceptualized many of the effects used throughout the Haunted Mansion. Grandpa Marc is Marc Davis, who was in charge of designing many of the scenes and characters of the experience, and many more individuals whose work lives on for Guests to enjoy today.

Shadowy Figure – Once onboard their Doom Buggies and moving through the attraction, Guests soon find themselves passing through a conservatory with a thunderstorm raging outside through the windows and a piano playing a mournful and slow version; of “Grim Grinning Ghosts.” The scene is certainly one of many iconic ones from the attraction; however, many Guests miss the shadow of the ghostly piano player that can be seen on the floor below.

Hidden Donald – As the Doom Buggies continue through the Haunted Mansion and onto the endless hallway, Guests should take a moment to look away from the floating candelabra and take in an often missed detail nearby. Immediately to the left of the endless hallway is a formal high-backed red chair with yellow markings. Those who look closely will notice that the yellow markings actually create Donald’s face and hat for a twist on a classic Hidden Mickey.

The Raven – While continuing through the various scenes of the Haunted Mansion, Guests are sure to pick up on the ominous presence of a red-eyed raven who seems to follow them from scene to scene. Legend has it that the raven was originally going to be the narrator of the experience in place of the Ghost Host, and those who pay attention will notice that the raven does seem to appear every time the Ghost Host pops in to speak with Guests. The raven can be spotted in the conservatory, Madame Leota’s séance room, and just before entering into the vault with the hitchhiking ghosts, among other locations. 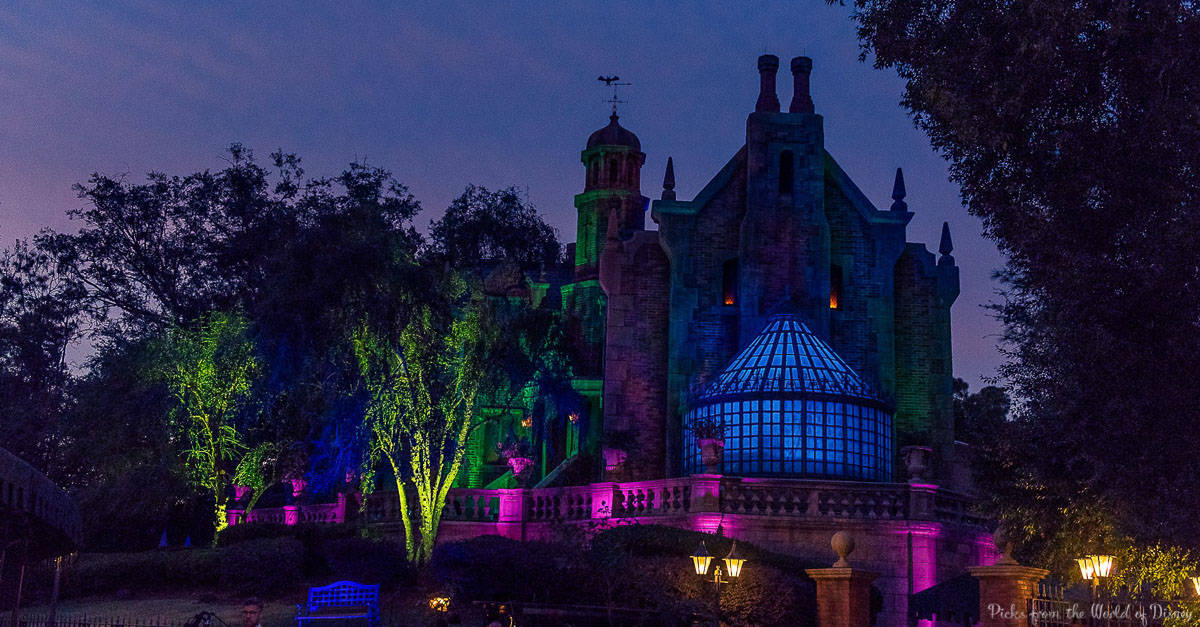 Constance’s Jewelry – The attic scene is one of the most iconic in the attraction and, over the years, has received some changes and updates leading to the story that it now tells. As Guests move through the attic, they learn of Constance, the bride who seemingly killed off her husbands one by one to inherit their fortunes. While there are neat effects that showcase each husband losing his head, there is another small detail in each wedding portrait that most don’t notice. In each corresponding wedding portrait, Constance dons a new pearl necklace so that by the time she is seen as her ghostly self, she has five necklaces- one for each husband she killed.

Skeletal Sconces – After disembarking the Doom Buggies, Guests step off onto a moving platform inside of a crypt and make their way back out into daylight. Guests who pause and look up in the unloading area can notice sconces on the walls lighting the area that simply doesn’t look right. That is because the arm of each sconce is an actual skeletal arm holding up a torch. These odd touches are a remnant of original concept art created by Imagineer Rolly Crump from when the Haunted Mansion was originally being developed as a museum of the weird. They’re a great detail that many miss that pays tribute to the early stages of a beloved attraction! 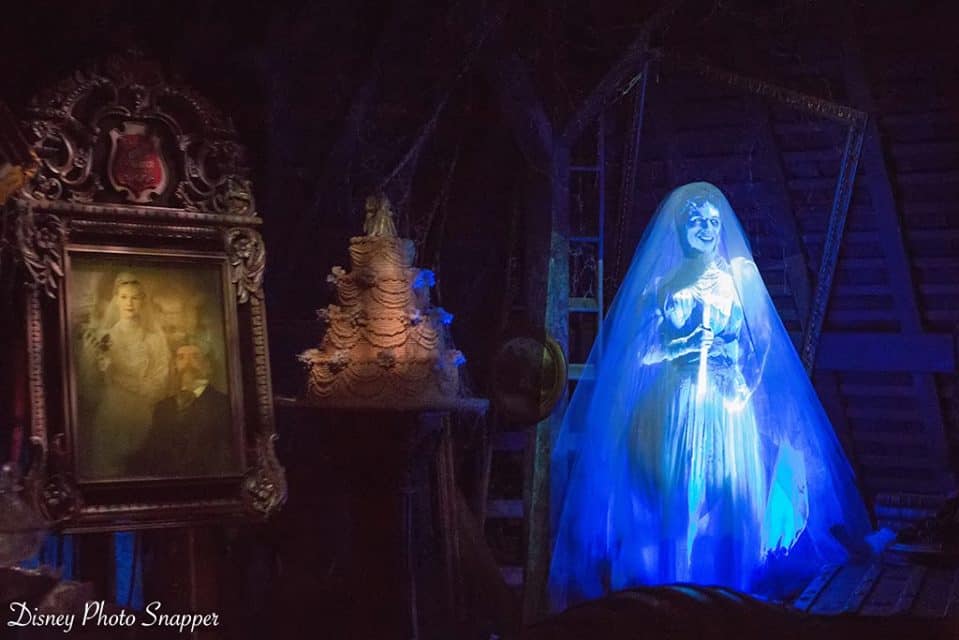