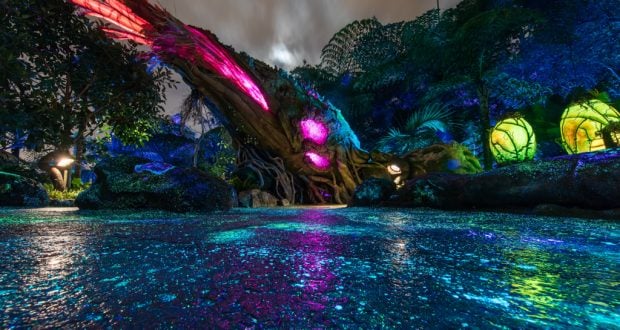 Skip That, Ride This Instead at Walt Disney World’s Animal Kingdom

Disney’s Animal Kingdom Theme Park is perfect for Guests who love animals. Or dinosaurs. Or yetis. Or bioluminescence. Or fabulous theming incorporating artifacts from all over the globe. There’s a lot for everyone to enjoy at Animal Kingdom!

Because it’s by far the biggest Disney Theme Park in the world at 580 acres, there’s a lot to cover here, which means making some hard choices about what to see and do and what to skip. Here are some suggestions to make your decisions a little easier.

One of the coolest things about Disney’s It’s Tough to be a Bug! is its location inside the Tree of Life (yes, the theatre itself is at the base of the tree!). This is a 3D movie based on the Disney Pixar animated film A Bug’s Life, with some fun 4D effects (smells, splashing water, fog machine).

It’s a great opportunity to get out of the Orlando heat for a bit, but there’s just so much to see in Disney’s Animal Kingdom Park that it’s hard to justify spending time to watch a movie – even if it is inside the Tree of Life. Feel free to skip this one.

See: A Celebration of Festival of the Lion King

Live theatre is always top-notch at Walt Disney World, and we’re thrilled to see it make a comeback after so long on pandemic hiatus! Head to A Celebration of Festival of the Lion King to experience the African savanna inspired by Disney’s animated film The Lion King.

Your favorite songs and characters from the film are brought to life by stilt walkers, larger-than-life puppets, acrobats, and dancers, all magnificently costumed. Guests will feel like they’re at a Broadway show (but a very short one, as Festival of the Lion King, is just 40 minutes long), and this is a fabulous way to introduce little ones to the magic of theatre. Add this one to the must-see list!

If you’ve ridden Dumbo the Flying Elephant or The Magic Carpets of Aladdin at Disney’s Magic Kingdom, then you’ve already ridden a superior version of TriceraTop Spin in DinoLand USA at Disney’s Animal Kingdom. The only difference here is that Guests ride in gondolas that look like adorable triceratops.

DinoLand USA is undergoing refurbishment (Primeval Whirl has already been demolished), so there’s currently not much that’s worth your time in this area of the Park. You won’t be missing a thing if you skip TriceraTop Spin.

There are a few reasons that DinoLand USA is still worth a (quick) visit while you’re in Disney’s Animal Kingdom Park. The first is the delightful quick service restaurant Restaurantosaurus, and the second is DINOSAUR.

This time traveling, thrill-packed ride brings you face-to-face with a prehistoric jungle, Audio-Animatronic dinosaurs, and blazing meteors as you search for an Iguanodon to bring back to the present. DINOSAUR is full of moderate scares and maximum fun – and it features some well-known voices and faces in the queue and pre-show (Wallace Langham, Phylicia Rashad, and Bill Nye).

Full disclosure: I rode Avatar Flight of Passage with someone who loved it, and the ride has a massive following. It’s unique in the Parks, and feeling a banshee “breathe” beneath you is admittedly pretty cool. But this ride will be problematic for many Guests – those with motion sickness (I couldn’t keep my eyes open during the ride without feeling nauseous) and those whose body types aren’t compatible with the seating and restraints.

You’ll straddle your ride vehicle, and the locking mechanisms must fit properly, or you’ll be asked to disembark – and while you can test out the ride vehicle itself before riding, you won’t be able to test the locking mechanisms. To make matters worse, Flight of Passage is known to have some of the longest wait times on WDW property, and Genie+ is not available for this ride.

So if you don’t want to potentially wait upwards of five hours to ride, you’ll need to pay for an individual Lightning Lane selection for Avatar Flight of Passage. Think about skipping this one in favor of something with a shorter line that you’re guaranteed to be able to ride and enjoy!

Pandora – The World of Avatar at Disney’s Animal Kingdom Park is simply magical, and Na’vi River Journey encapsulates that magic in one gorgeous attraction. The bioluminescent forests of Pandora come alive through a combination of projections and physical recreations (don’t forget to look up!) as you glide along the river.

Guests will love the footprints left behind by tiny rainforest creatures, not to mention the breathtakingly lifelike Shaman of Songs, Disney’s most advanced Audio-Animatronic to date. Unlike its cousin Flight of Passage, anyone can ride and enjoy Na’vi River Journey, you’ll never wait half a day to ride, and the attraction is covered under Disney Genie+.

With its abundant animal life, magnificent Tree of Life Park icon, and fabulous theming, Guests at Disney’s Animal Kingdom have much more than rides to enjoy! But when it comes to choosing attractions that are worth your time (and money), this list will hopefully help to give you the information you need to decide what to skip and what to ride.