A Disney creator has posted several videos on TikTok that capture her hard at work, cleaning some engraved stones at Disneyland Resort. Located in the Esplanade, the personalized, hexagon-shaped pavers are well known by Disneyland Park-goers.

The area between Disney California Adventure Park and Disneyland Park contains several of these special bricks adorned with the names of different Disney Guests. In the past, the bricks could be purchased as part of Disney’s “Walk of Magical Memories,” which lasted for eleven years.

This is for @Melanie Severson Platte 🤍🤍 #chimchimchurro #disneyland

The pavers allowed Guests to be part of Disney history. Once purchased, they were personalized with the buyer’s name, hometown, and a special date. Unfortunately, the program ended in 2011, and Disneyland has not made any announcements regarding the tiles since then.

In the video, made by @chimchimchurro, she starts her cleaning process by placing several tiny orange cones around one of the hexagon tiles. She then adds a powdery substance to the metal emblem at the top of the block. 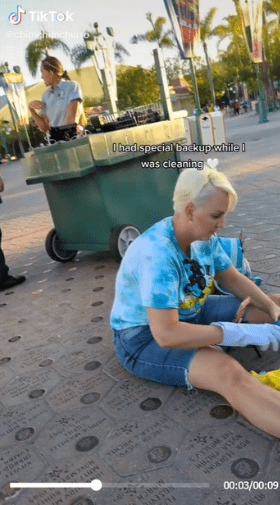 Pouring an unknown liquid onto the powder, she begins to scrub the emblem thoroughly, immediately brightening it up. Then, she works on the entire tile, cleaning the area until it becomes soapy.

After that, it’s time to wipe it dry, revealing a more pristine, shiny version. We don’t know exactly why she’s doing this, and we’re not sure what Disney Parks has to say about it, but it seems as if it’s something she enjoys, so we’ll leave it at that! 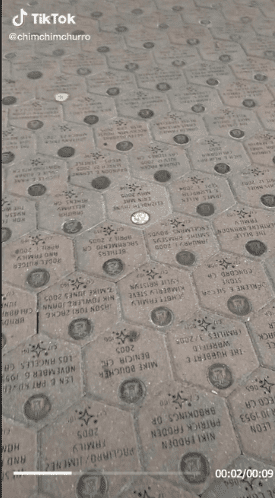 In another video she shared, Cast Members can be seen behind her as she cleans, and look unphased by her ritual. In yet another video, as she scans a section of Disney bricks with her camera, the ones she’s scrubbed can be seen sparkling and shining compared to the others.

With some of her videos acquiring over a million views, it seems this Disney fan is on to something! Maybe one day, we’ll see all the bricks restored to their original splendor!