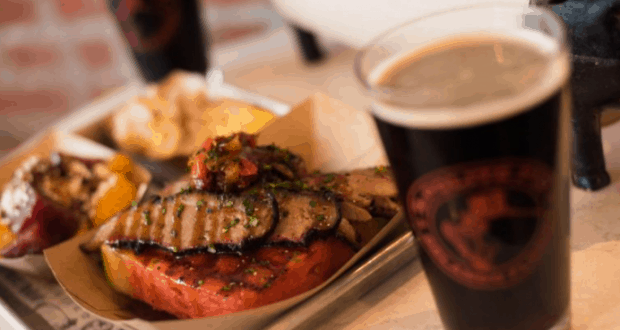 Disney Springs is your Walt Disney World destination for entertainment, dining, shopping and nightlife.  It’s been attracting guests since it opened in 1975, but it’s changed quite a bit since then.  How much do you know about this popular spot?  Here are our top questions to stump even the biggest Disney fan.  How many answers do YOU know?

1. How many other names has Disney Springs had?

Disney Springs has enjoyed its current name since 2015, but it’s only the latest in a long line of names this area has had over the years.  Originally, Disney Springs was referred to as Lake Buena Vista Shopping Village, soon followed by the name Walt Disney World Village.  It became Disney Village Marketplace in the late 1980s, and in 1997, the name was changed yet again to Downtown Disney, which persisted until the current naming of Disney Springs several years ago.  That brings the number of names this popular area has had up to a total of 5!

2. How big is Disney Springs?

If you haven’t visited Disney Springs for a few years, you’ll notice quite the change!  Now that the extensive multi-year renovations are complete, there are fully double the locations on site that there where back when the area was known as Downtown Disney.  While the number is always changing, there are more than 150 different restaurants, shops, and entertainment venues in Disney Springs!  And just how big is it?  Well, Disney Springs occupies an impressive 120 acres!  Better wear comfy shoes.

3. Where can I get a cupcake after hours in Disney Springs?

Sweet tooth, rejoice!!  There are plenty of bakeries in Disney Springs where you can get your fix of all things delectably sweet (there are even have vegan and gluten-free options!).  But what if you have a craving for a gourmet cupcake after the bakeries have closed for the evening?  Have no fear!  There’s a cupcake ATM (one of the most beautiful phrases we’ve ever heard) outside Sprinkles that welcomes late night visitors. 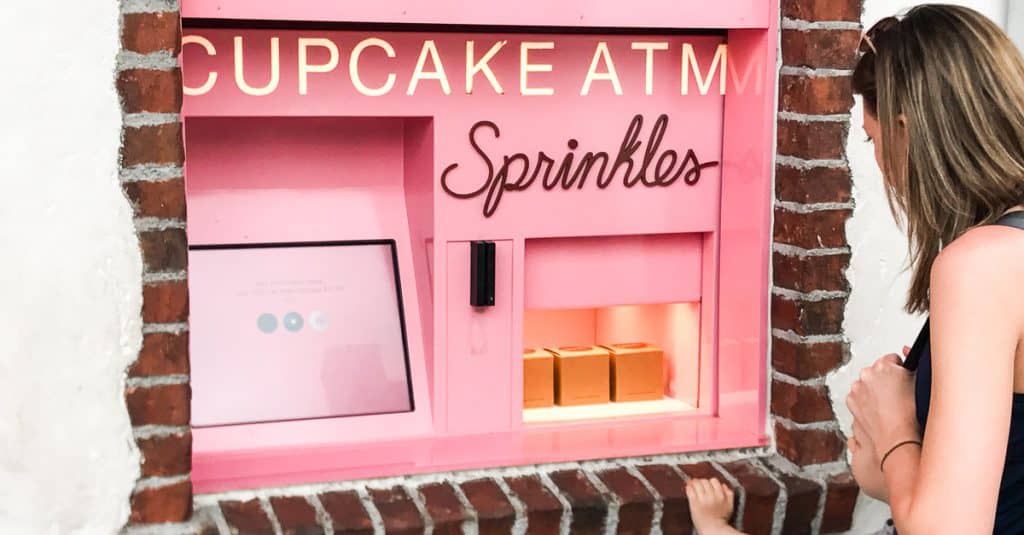 4. How often is the meteor shower at T-REX?

Budding paleontologists can get their fill of dinosaurs and other prehistoric creatures at Disney Springs’ T-REX, where animatronic dinos move and roar amid lush jungle vegetation (think: Rainforest Café, with dinosaurs!).  Even better?  Every 20 minutes, the lights dim and there’s a meteor shower in the restaurant, which makes the wildlife even louder!

5. How late is Disney Springs open?

Happily, Disney Springs is open daily for all of your entertainment, dining and shopping needs!  It’s generally open until midnight, but there are some venues that stay open even later from Thursday until Saturday.  You can take a bus to Disney Springs from any of the parks starting at 4:00 pm, and transportation is waiting to take you back to your resort into the wee hours of the morning.

6. How can I tour Lake Buena Vista in a retro Amphicar?

If you love vintage cars and boats, you’ll want to head to The BOATHOUSE in Disney Springs.  You can check out rare retro boats on display, and even take a 20-minute tour of Lake Buena Vista in a vintage Amphicar.  You’ve never seen Disney Springs like this before! 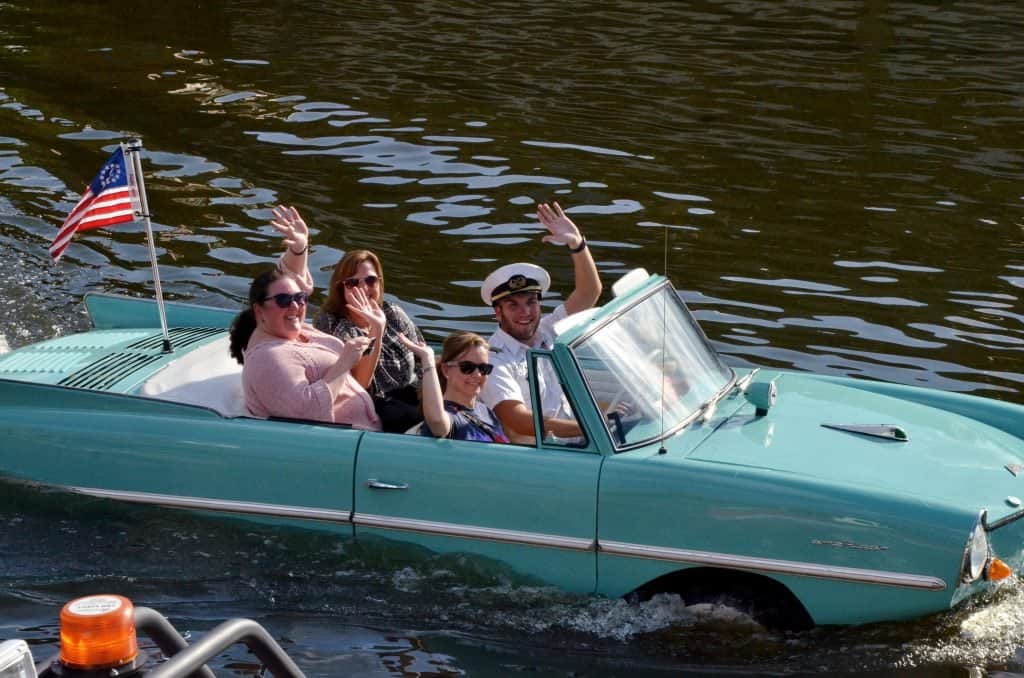 7. Where can I take a water taxi from Disney Springs?

Who doesn’t love boats?  While you can certainly take a bus from Disney Springs to your resort, let’s face it – it’s just more fun to hop on a water taxi for a relaxing ride home.  Guests staying at Disney’s Port Orleans Resort (both French Quarter and Riverside), Old Key West Resort, and Sarasota Springs Resort and Spa can take advantage of the complimentary water transportation to and from Disney Springs.

8. How many bricks were recycled from a local college and used in The Landing?

Disney Springs has four main themed areas, and because it’s Disney, each area has its own look and backstory.  One of the main areas is The Landing, which some guests might remember as Pleasure Island in previous incarnations.  Like the rest of Disney  Springs, The Landing has been completely reimagined – look down, and you’ll see some of the over 57,000 bricks that were taken from Rollins College, nearby, and put to use here!

9. How much water do the springs in Disney Springs hold?

You can now stroll through the centre of Disney Springs and admire the springs that give this area its name.  A whopping 1.2 million gallons of water run through the springs!  That’s a lot of water.  If you want to look at it another way, the length of the springs is the same as the distance you’ll walk down Magic Kingdom’s Main Street USA to reach Cinderella Castle.

10. How much helium is in Aerophile’s balloon ride?

Want an unparalleled view of Walt Disney World?  Climb aboard Aerophile’s helium balloon ride and rise 400 feet in the air for panoramic views of the most magical place on earth.  You can fit 29 people in the balloon’s basket, and the balloon is filled with an astonishing 210,000 cubic feet of helium! 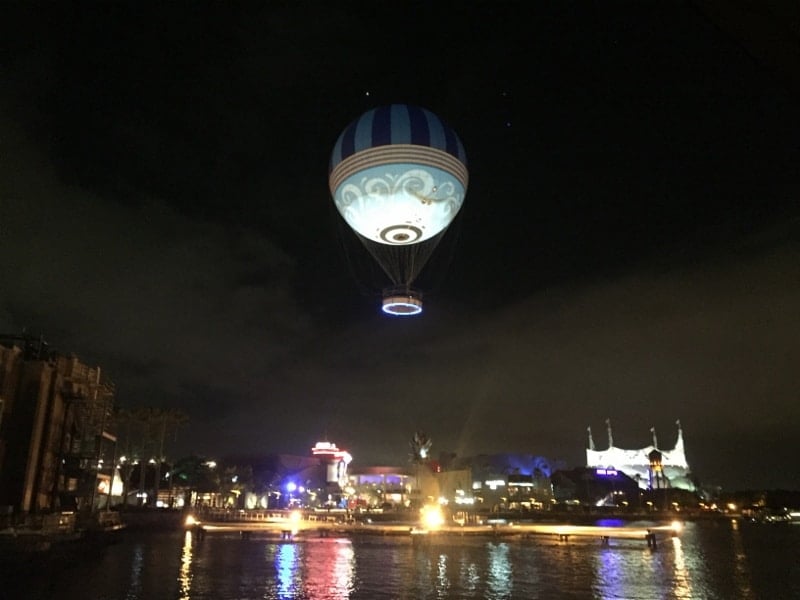 2019-02-16
Stacy Milford
Previous: 8 Things To Know About The Highway In The Sky Dine Around at Walt Disney World
Next: Remembering Disney Legend, Dave Smith