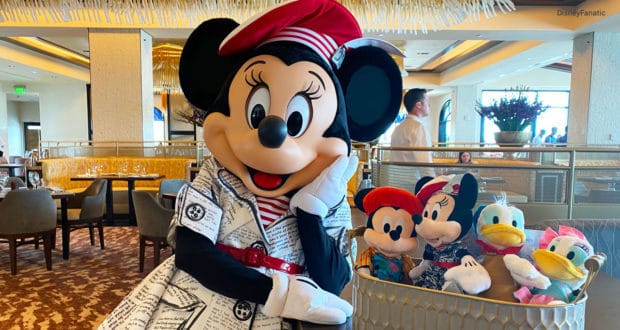 Walt Disney has often been quoted as saying that “I hope we never lose sight of one thing-that is was all started by a mouse.”  While Walt was referring to Mickey Mouse, it’s easy to say that his sidekick, Minnie, is just as responsible for the success of Walt’s dream. Minnie Mouse had her introduction to the world in November 1928 alongside Mickey in the classic short, “Steamboat Willie”, and she’s never looked back since.  Here are some of my favorite ways to celebrate all things Minnie!

Available in the classic black style with a red bow or in a wide variety of other colors and textures, buying a pair of Minnie Ears should be the first stop on your list to getting a Minnie fix. Minnie ears adorned with sequins are a very popular choice, as well as the rose gold option. Minnie ears are also available to purchase all over Walt Disney World, and you will probably want to get several different kinds.

NOTE: The Minnie Van Service is temporarily unavailable. We hope this service will start again soon!

A popular transportation alternative to Disney buses, ferries, monorail, and the Skyliner is the Minnie Van. While this private mode of transport is not free, unlike the other options, it’s extremely convenient. It’s also hard to resist riding in a cute red Chevy Traverse decorated with white polka dots. These vans are available to request via the Lyft app, and they will transport you anywhere in the Walt Disney World resort, as well to and from Orlando International Airport.

Minnie makes frequent appearances with her Main Man, Mickey, in the impromptu cavalcades that pop up in the Magic Kingdom, EPCOT, Disney’s Hollywood Studios, and even on boat at Disney’s Animal Kingdom. She’s always ready with a sweet smile and wave if you catch her gliding by!

Stroll into the Chinese Theater in Disney’s Hollywood Studios and get ready to see Minnie like you’ve never met her before. One of the newer rides in Walt Disney World, Mickey and Minnie’s Runaway Railway takes the place of the much-loved Great Movie Ride attraction. Guests are prepared to watch a classically styled Mickey Mouse cartoon, ‘A Perfect Picnic”. A train arrives to pick up the moviegoers, and soon afterwards, the train leaves the track and Disney magic takes over! It’s a one-of-a-kind ride with a one-of-a-kind Mouse!

Expand your Minnie Mouse collection each month with Minnie Mouse: The Main Street Attraction.  A new theme of Minnie Mouse collectibles is introduced each month, include the popular Minnie plush, a mug, pins, and ears. Favorite themes so far have been the Enchanted Tiki Room, the Mad Tea Party, Space Mountain, and “it’s a small world”. Guests loving this collection can pick up some of the merchandise at the World of Disney at Disney Springs and online on Shop Disney.

Minnie is always smiling at several popular character meals, including Topolino’s Terrace, a new eatery at the very top of Disney’s Riviera Resort. Minnie is available at the prix fixe breakfast in her special artist-inspired dress, along with her pals Mickey, Donald, and Daisy. Note that Minnie and the other characters love to stroll by for a few pictures while guests enjoy the delicious meal, but they won’t stop for individual hugs and photos with guests.

Before you head back home, make sure you are fully stocked up on Minnie Mouse pajamas, jewelry, apparel, purses, kitchen accessories, and collectibles available in all of the parks and resorts, as well as Disney Springs.