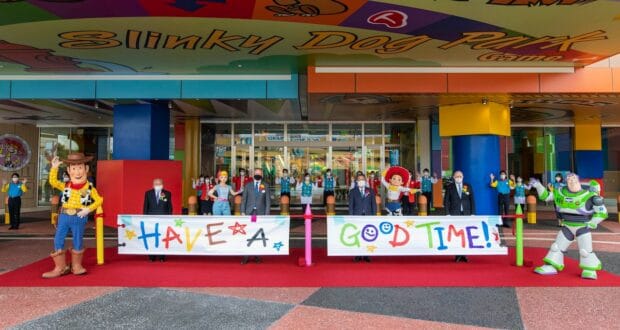 Have you ever wanted to know what it feels like to be shrunken down to the size of a toy?

Well, as of today, you can feel exactly that, thanks to the Tokyo Disneyland Resort Toy Story Hotel. This new Toy Story-inspired hotel has 11 floors with 595 rooms and is the first moderate class Disney Resort Hotel at Tokyo Disney.

Walt Disney Imagineering and Pixar Animation Studios have teamed up to create this visually spectacular hotel, where Guests are welcomed as “honorary toys”. 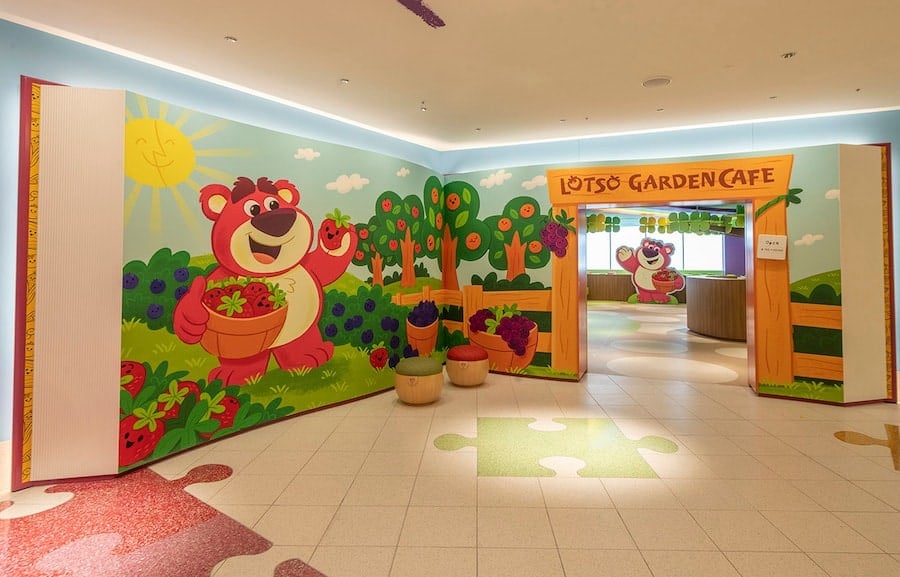 The Guest experience will have them immersed in the colorful world of their favorite Toy Story characters, including Woody, Buzz Lightyear, Jessie, and more.

The backstory that was created by this heavyweight collaboration is that “Andy has assembled this toy hotel so that his toys have a place to stay while he is away at Cowboy Camp.” 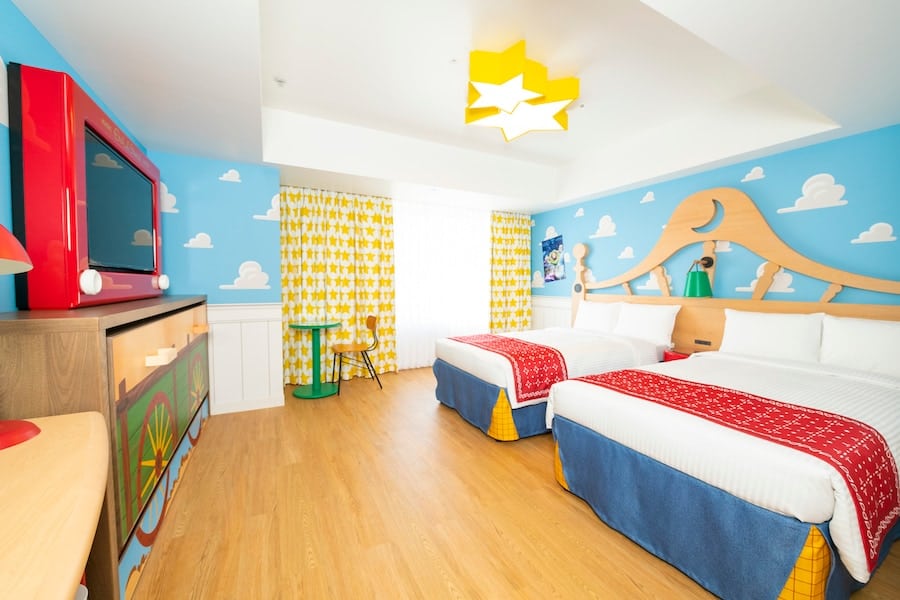 The fun starts before Guests can even walk through the Toy Story Hotel doors with the Slinky Dog Park. This is where Guests will find 12-foot-tall action figures of Buzz Lightyear and Jessie standing on a Slinky Dog game board.

The lobby of the Disney Resort Hotel is filled with colorful toys and games that include a slot car track overhead. You will even find an oversized Bo Peep game board on the ceiling as well as decorative puzzle pieces on the floor. 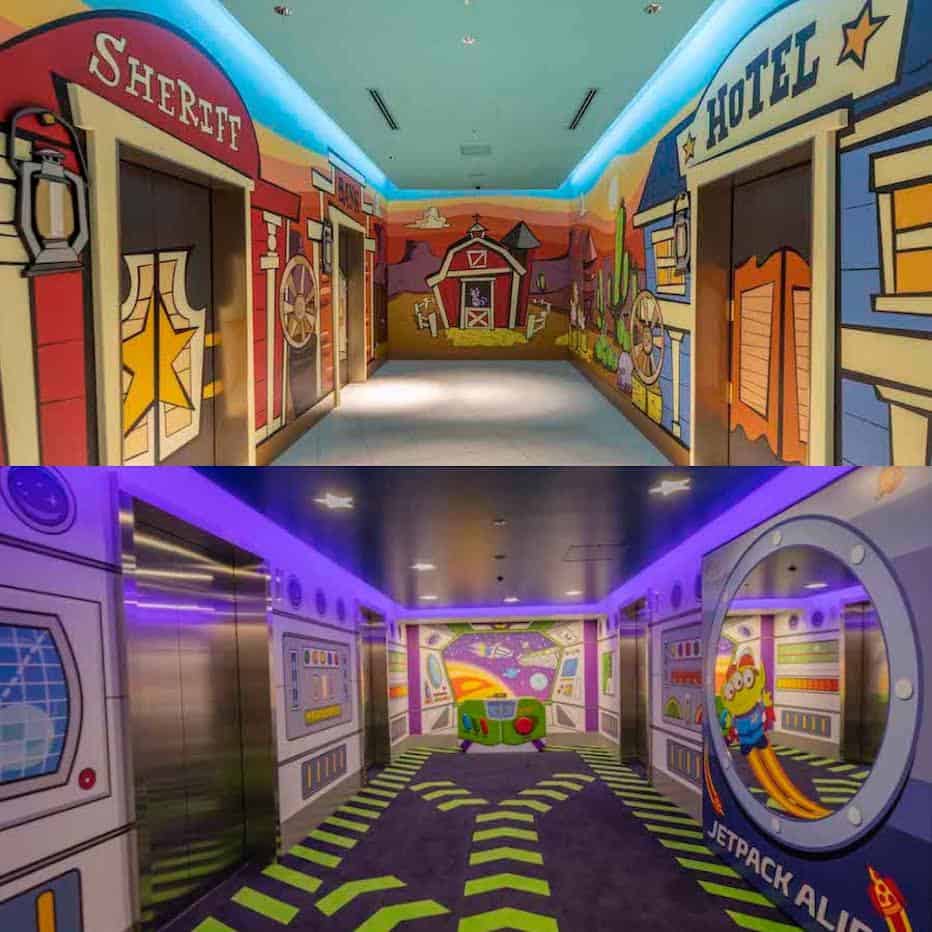 The Toy Story Hotel is separated into 2 wings. One wing is Buzz Lightyear-themed, and the other, Woody’s Roundup.

The Guest rooms are “based on Andy’s bedroom in the first Toy Story film.” The walls are covered in the blue sky and cloud pattern just like Andy’s bedroom from the film. The television is even made to look like a giant Etch A Sketch. All rooms are all equipped with an oversized Mickey Mouse wristwatch on the wall so that you will always be on time. 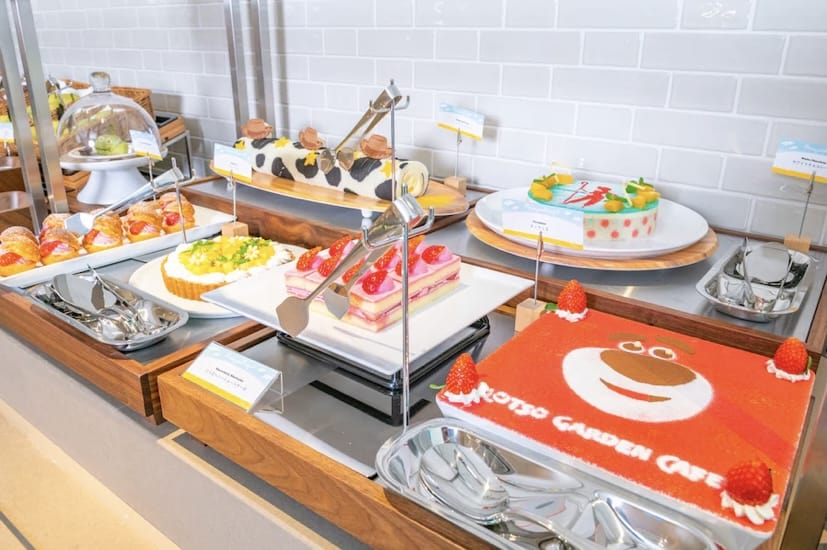 Hey, we know it’s hard work being a toy, so if you get hungry after all your playtime, then you can stop at the Lotso Garden Cafe to grab a bite to eat and recharge those batteries.

The Lotso Garden Cafe will only be open to Guests staying at the hotel. Breakfast is served from 6:30-10:00 a.m. and dinner from 6:00-9:00 p.m. The restaurant offers a buffet service for breakfast and dinner, including food and snacks that are inspired by the popular film series.

After your meal, you can take a walkout to the back of the hotel, which is facing Tokyo Bay, to find Hamm operating a toy crane as he is hoisting his alien friends. As Guests continue on, they will enter Toy Friends Square, which includes oversized statues of Woody, Bo Peep, Wheezy, and many more.

The Toy Story Hotel in Tokyo Disneyland Resort has something to offer for everyone and it is conveniently located across the street from Bayside Station on the Disney Resort Line Monorail. So with such amazing theming and accessibility so convenient who wouldn’t want to become an “honorary toy” and join in on the fun while Andy is away.