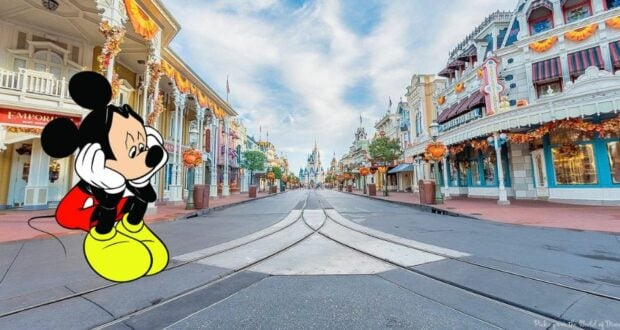 If you’re looking for an ideal time to visit Walt Disney World Resort but don’t have any desire to wait in ridiculously long lines… you may want to start packing your bags! New charts show the average wait times have plummeted at Walt Disney World.

Summer has wrapped up! With the fall season rolling in, children across the nation are returning to school, leaving Disney to experience a massive drop-off in attendance. The results are a drastic dip in the average wait times for Disney Park attractions.

@ScottGustin took to social media to share, “In case you didn’t hear, summer is over. Here is a look at the average wait times at Walt Disney World compared to the past 7 Wednesdays (7/13-8/31). @ThrillData”

The data shared in chart form below shows the black line from Wednesday, August 31, 2022, at Magic Kingdom Park:

Popular attractions like Seven Dwarfs Mine Train, Splash Mountain, and Space Mountain typically hold the highest wait times at Magic Kingdom. Over at EPCOT, Guests disappeared from the Parks with low wait times on popular attractions such as Remy’s Ratatouille Adventure, Frozen Ever After, and Test Track.

Disney’s Hollywood Studios always feels like one of the busiest Parks with attractions such as Star Wars: Rise of the Resistance, Slinky Dog Dash, and Mickey & Minnie’s Runaway Railway. Now, that black line shows attraction wait times drop from the fall season impact:

Guests are also posting to social media about the unusually low wait times. @JesseDeRosa took to social media to share screenshots of Disney Park wait times, as well as dining reservations open for extremely popular restaurants such as Hoop-Dee-Doo Musical Revue, and Topolino’s Terrace, which are typically filled up months in advance:

Some are even calling the Parks a “ghost town” as photos surfaced from August 30, 2022, of a nearly empty Magic Kingdom Park:

With this dip in attendance, we suspect the need for Disney Genie+ and the Lightning Lane is minimal. Of course, we don’t suspect this lull in attendance and wait times to last long!

It’s typical to see a dip when the school season begins, but with fall celebrations such as Mickey’s Not-So-Scary Halloween Party and the EPCOT International Food and Wine Festival in full swing, crowds are still expected to return – especially on Fridays, Saturdays, and Sundays.

To the dismay of many, the Disney Park Pass Reservation System still remains in tack for both Walt Disney World and Disneyland Resort.

Time to pack those bags and head for a getaway Disney experience to “the most magical place on earth” before the crowds return!