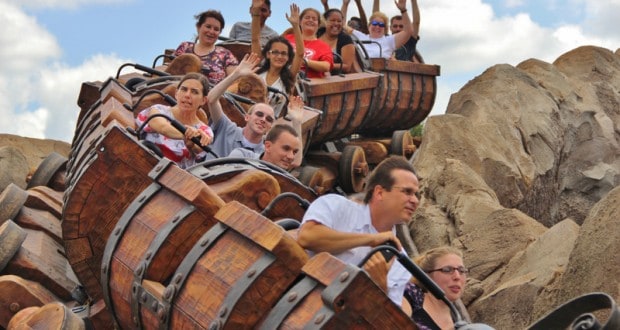 At Walt Disney World, you can purchase Early Morning Magic for $69 per adult and $59 per child (age 3 to 9), plus tax.  The event includes access to attractions before the park opens as well as a full breakfast buffet for each paid admission.  The event is only at the Magic Kingdom and Disney’s Hollywood Studios on select days and runs from 7:45 – 10AM with the park opening at 9AM.  This means the exclusive ride access, for limited attractions, is available from 7:45 – 9AM and breakfast will still be served through 10AM.  This event has been confirmed to extend through December, so if you have an upcoming trip you can check online or call (407) 827-7350 to buy your tickets.  Just remember that you will still be required to purchase regular theme park admission for day, even if you only intended to stay for the event. The details for the event at each park is as follows: