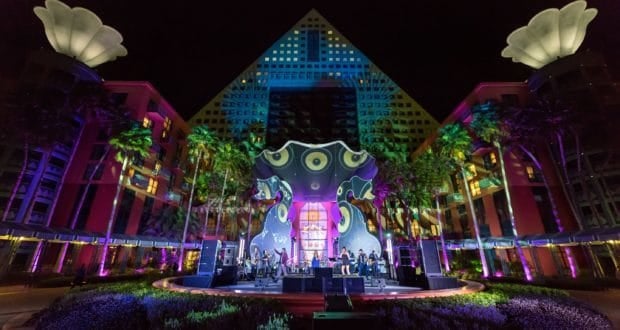 1. The resorts were designed by Michael Graves

Renowned architect Michael Graves took on the task of designing the Walt Disney World Swan and Dolphin under the leadership of then CEO Michael Eisner in the late 1980s. Graves is known for his modern and postmodern architecture, which can best be seen at the resorts through the shape of the buildings and subtle nods to water and land motifs seamlessly blended into the resort’s design. While the resorts have undergone a number of renovations over the years, the classic architecture from their opening in 1990 has remained a staple for all who stay there.

2. The resorts have 18 restaurants

This is a major perk of staying at the resorts. With 18 restaurants, you can always find something for every taste and budget AND if you find yourself without a reservation during a busier time of year at Walt Disney World you can rest assured that you can usually score a table here. The restaurants range from grab and go to signature dining experiences, and some of them (looking at you, Il Mulino!) are even worth the walk from World Showcase!

3. They feature the Westin Heavenly Bed

This fact may not seem that exciting if you have not yet stayed at the Swan and Dolphin, or any Westin hotel for that matter, but if you have you’re probably aware of just how comfortable the beds in the resorts are! The best part is that you can actually purchase the Westin Heavenly Bed for your own home. Next time you’re in the market for a new mattress, check the Westin website to order yours, then close your eyes and pretend you’re in Walt Disney World…

The Walt Disney World Swan and Dolphin Resorts are much larger than most Disney-operated resorts in the area (because they were designed specifically with convention Guests in mind), While there are thousands of rooms between the two resorts, one place where you won’t find a hotel room is in the top points of the main buildings’ triangles. The space up there is too small for a Guest room, so while its exterior is designed to match the rest of the resort, you’ll never find yourself staying up at the point.

5. There are five swimming pools on property…

…including something for families, a grotto pool with a waterfall and slides and even a lap pool. Another perk of staying at the resorts is the availability of so many different pools. You can sleep in on your day off from the parks and still walk up to grab the perfect spot by the pool, no problem!

Guests at the Walt Disney World Swan and Dolphin can take advantage of Disney resort Guest benefits like complimentary transportation to and from the theme parks (via watercraft to EPCOT and Hollywood Studios and buses to the other theme parks and Disney Springs.) They can even have merchandise sent back to their resorts from the parks!

7. Some perks are not included

Disney’s Magical Express does not provide service to the Walt Disney World Swan and Dolphin Resort (though the service is set to end altogether in 2022). Additionally while your MagicBand will work while you’re in the parks for tickets, you won’t have charging privileges and you’ll need to use an “old fashioned” card room key.

8. The Swan and Dolphin is the only place in Walt Disney World that still has swan boats!

The resort’s award-winning steakhouse is named for Don Shula, the winningest coach in football history who led the 1972 Miami Dolphins to an undefeated season, the only team ever to do so. The restaurant’s steaks are aged using the Shula Cut method, and you likely won’t find a higher quality steakhouse dining experience anywhere else on property.

10. The Swan and Dolphin host an annual Food and Wine Classic

Each year on select dates in the fall, the resorts host their Food and Wine Classic. The event is similar to EPCOT’s International Food & Wine Festival with various kiosks stationed around the property with lots of different foods and drinks to try however it is self contained at the resort. For the ultimate foodie experience, book your stay during the Food and Wine Classic weekend and attend both events!